No end in sight as over 1,000 die in India monsoon rains 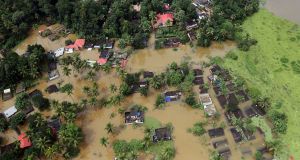 A flooded area in India’s southern state of Kerala, one of the country’s worst-hit areas, where over 400 people have lost their lives. Photograph: Sivaram V/Reuters

More than 1,000 people have now died in ongoing monsoon rains across India that show little sign of abating. In addition to the more than 400 who have died in southern Kerala state alone, more than 600 lives have been lost in four other states due to floods triggered by excessive rain.

These flood-hit provinces include the northern state of Uttar Pradesh, where 204 people have been killed, and Bengal in the east, which accounted for 195 fatalities. In northeastern Assam and southern Karnataka state 46 and 161 people respectively have died after unrelenting rain.

More than two million people in all five states, including 1.45 million in Kerala, have been forced to live in crowded relief camps for weeks, where food and water are scarce and living conditions wretched.

Although flood waters have somewhat receded in Kerala in recent days, most people in the relief camps have nowhere to go as their homes, possessions and livelihoods were washed away in the downpour that erupted on August 8th.

The few who did manage to return home had to grapple with floating animal carcasses and mountains of mud that the receding floodwaters had left behind.

State health officials said on Monday that three more people had died of leptospirosis or “rat fever” in Kerala over the weekend, taking the toll from the contagion spread by exposure to dead rodents to more than 20.

Local media reported that this number could rise substantially over the next few days as detailed medical reports from outlying regions came in.

Meanwhile, tens of thousands of houses in low-lying areas across Kerala remain submerged and roads and highways waterlogged after the worst floods in the state since 1924.

State officials estimate that the Kerala floods will inflict losses of more than €307 million in tourism revenue, with €2.5 billion in damage done to the state’s infrastructure.

Kerala chief minister Pinarayi Vijayan has launched a campaign to raise funds from the vast numbers of overseas Kerala expatriates.

Flooding in India’s four-month monsoon season, which begins in June, is an annual recurrence.

According to the national disaster management authority, an average of 1,600 people have died in the past two years due to excessive rain and flooding, which most of the country’s 29 provincial governments are ill prepared to handle.

The authority recently declared that the states’ assessment of hazards and vulnerabilities to natural disasters were “coarse” and lacked “in-depth study” of the enduring problem.