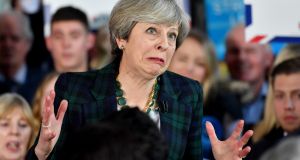 British prime minister Theresa May speaks to supporters at an election campaign in Leeds on Thursday. Photograph: Anthony Devlin/Getty Images

Mr Johnson told the BBC earlier on Thursday that the prime minister shared his view that “it would be very difficult for us to say no” if Donald Trump asked Britain to help launch such an attack and that the government could join the action without seeking parliamentary consent.

But, during an election campaign visit to Leeds on Thursday night, Ms May declined three times to say that she shared the foreign secretary’s view.

“This is a hypothetical issue because there are no proposals for further strikes on Syria on the table. I think what is important when we look at Syria is to ensure that we’re working for future stability in Syria,” she said.

“Boris is doing a great job as foreign secretary,” she said.

Ms May used her visit to Leeds – a traditional Labour stronghold – to appeal to lifelong Labour voters to abandon their party and “lend their vote” to the Conservatives on June 8th, framing the election as a stark choice between her and Jeremy Corbyn as prime minister.

The prime minister said that, although it might say Labour on the ballot, Mr Corbyn would get the vote.

“There are only two people who can possibly be prime minister on the 9th of June. Only two people who can possibly represent Britain in Europe. The choice is between five years of strong and stable leadership with me as prime minister, or a coalition of chaos with Jeremy Corbyn at the helm, a weak leader negotiating Brexit and higher taxes, debt and waste,” she said.

“That is why in this election – the most important election this country has faced in my lifetime – every single vote counts. And everyone in our country has a positive reason to lend me their vote. Because this election is not about who you may have voted for in the past. It is about voting in the national interest.”

Ms May cited remarks by German chancellor Angela Merkel about the forthcoming Brexit negotiations in support of her claim that she needed a big Conservative majority to strengthen Britain’s hand in the talks.

Dr Merkel told the Bundestag that Britain’s hopes of negotiating a free trade deal with the EU in parallel with its divorce deal were an illusion. She said talks about Britain’s future relationship with the EU could only begin after the two sides had reached a deal on the rights of EU citizens in the UK and British citizens in Europe, and Britain’s ongoing financial obligations to the EU.

“We have seen chancellor Merkel’s comments today. She says the UK has ‘illusions’ about the process and that the 27 member states of the European Union agree. We can see how tough those negotiations are going to be at times. Yet our opponents are already seeking to disrupt those negotiations – at the same time as 27 other European countries line up to oppose us,” Ms May said.

Earlier, Mr Corbyn rejected the suggestion by Mr Johnson that Britain would find it difficult to refuse a request for help from the United States if Washington launched further air strikes against Syria if Bashar al-Assad used chemical weapons again. The Labour leader said Britain should instead pursue diplomatic action to end the Syrian conflict, and appeared to cast doubt on whether the Assad regime was responsible for the chemical attack which prompted the recent US missile attack.

“We don’t need unilateral action. We need to work through the UN. But above all, we need to bend ourselves totally to getting a political settlement in Syria, and allow the inspectors space to work, allow them to make sure we know who did that terrible chemical weapons attack, and also recognise that the inspectors there are already destroying any stocks of chemical weapons they find,” he said.