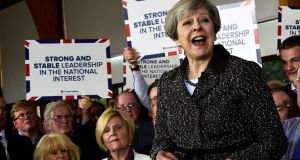 Theresa May at the Brackla Community Centre, in Bridgend, Wales, this week: a bigger majority could give her more leeway in negotiations with the EU. Photograph: Rebecca Naden/Reuters

Theresa May has defined the general election as a vote of confidence in her “strong and stable leadership” as Britain prepares to leave the European Union. But if the Conservatives win by the kind of landslide the polls are predicting, the election could have a more far-reaching impact on British politics beyond Brexit.

A bigger majority could give the prime minister more leeway in negotiations with the EU, particularly over the nature and duration of any transitional arrangements after Britain leaves. But May’s policy on Brexit has been clear since she addressed the Conservative conference last October.

She has chosen a hard Brexit, outside the single market and the customs union, which prioritises immigration control and the end of European Court of Justice (ECJ) jurisdiction. An enhanced majority in the House of Commons will not move May towards a softer Brexit, although it could help her to make it a slower one.

May made two speeches at October’s party conference, using the second to outline her domestic policy vision, which combined populist rhetoric on immigration with a call for a more interventionist state. An Oxford graduate married to a City fund manager, the prime minister criticised wealthy elites and made her notorious claim that “if you believe you’re a citizen of the world, you’re a citizen of nowhere”.

The speech appeared to herald a departure from the small-state, economic liberalism that had been the reigning Conservative orthodoxy from Margaret Thatcher to David Cameron.

“It’s time to remember the good that government can do. Time for a new approach that says while government does not have all the answers, government can and should be a force for good; that the state exists to provide what individual people, communities and markets cannot; and that we should employ the power of government for the good of the people,” she said.

May appointed a minister for industrial strategy, two words that had not been spoken above a whisper in Whitehall for decades, but her government’s economic policy has been almost identical to Cameron’s. This is partly because, as she discovered when chancellor Philip Hammond tried to increase some national insurance rates in last month’s budget, she is still bound by Cameron’s 2015 manifesto but also because her narrow majority also leaves her vulnerable to backbench rebellions.

Although May warned on Monday that a Conservative victory is not inevitable, her decision to campaign this week in South Wales, the East Midlands and West Yorkshire betrays her optimism. Conservative canvassers report an unusually positive response on the doorsteps, with voters especially enthusiastic about the prime minister herself.

The polls put the Conservatives far ahead of Labour in England, surging in Wales (ahead of Labour in one poll) and capturing a third of the vote in Scotland. Such an outcome would reshape the British political map, driving Labour out of many of its traditional, industrial strongholds and restoring the Conservatives to an important role in the politics of Scotland and Wales.

Already the official opposition at Holyrood, the Conservatives could win up to 12 seats in Scotland if the polls are right. Nicola Sturgeon’s Scottish National Party (SNP) would still hold a substantial majority of Scotland’s seats at Westminster. But May will portray any fall in the SNP’s representation as a sign that momentum is moving away from the drive for a second independence referendum.

A Conservative landslide could also affect Northern Ireland, since May would no longer need the votes of Democratic Unionist Party MPs at Westminster to shore up her majority. A committed unionist, May is unlikely to effect a major change in policy towards the North, but a bigger majority would give her government more room for manoeuvre in dealing with the parties there.

A big election victory in June would bolster May’s authority in a parliamentary party where, according to one report, some MPs have already started referring to her as “Mummy”. Because it is a snap election, Conservative central headquarters has taken control of the candidate-selection process, sending local party organisations a shortlist of three candidates to choose from.

With a big electoral mandate, May could reshuffle her cabinet to make it more in her own image and, no longer tethered to Cameron’s manifesto, she would be free at last to put her communitarian vision of society into action.