British PM says most of other issues in withdrawal agreement solved 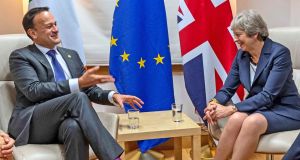 British prime minister Theresa May has asked European Union leaders to help her find a creative way out of the impasse in Brexit negotiations surrounding the Northern Ireland backstop.

Addressing the 27 leaders at the start of a summit in Brussels on Wednesday night, Ms May said she remained fully committed to a legally operable backstop to guarantee there can be no return to a hard Border.

The prime minister said that, despite the failure of British and EU negotiators to reach a deal on the withdrawal agreement ahead of the summit, the two sides had defied expectations in the past.

She recalled last December’s joint report and progress in March and June on elements of the withdrawal agreement and on a transition period.

“We have shown that we can bring difficult deals together constructively. I remain confident of a good outcome,” she said. “The last stage will need courage, trust and leadership on both sides.”

Ms May spoke for between 15 and 20 minutes and then left before the 27 other EU leaders had dinner and discussed the state of Brexit negotiations. Before the dinner, she had bilateral meetings with European Council president Donald Tusk, European Commission president Jean-Claude Juncker, French president Emmanuel Macron and Taoiseach Leo Varadkar.

“There is still the question of the Northern Irish backstop. But I believe everybody around the table wants to get a deal. By working intensively and closely, we can achieve that deal. I believe a deal is achievable and now is the time to make it happen.”

Asked about EU chief negotiator’s chief negotiator Michel Barnier’s suggestion that the post-Brexit transition period could be extended by a year, Ms May declined to rule it out. Downing Street said only that Britain was not proposing an extension beyond the current date of December 31st, 2020.

In London, Brexit secretary Dominic Raab said that a “meaningful vote” in parliament on the final Brexit deal should offer MPs a simple choice between accepting or rejecting it.

“Once the deal is presented to parliament, the procedure through which it is voted upon must allow for an unequivocal decision, and one which is clear to the British public. Another other than a straightforward approval of the deal will bring with it huge uncertainty for business, consumers and citizens,” he said in a letter to the House of Commons procedural committee.

Pro-European MPs want to be able to table amendments to any motion on the Brexit deal so that they are not faced with a choice between accepting an unsatisfactory deal or allowing Britain to leave without any deal.