Brexit: Theresa May warns against ‘permanent limbo’ of border backstop 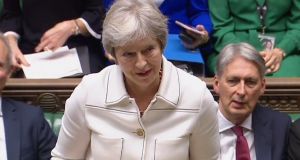 Theresa May addressing MPs in the House of Commons on Monday

British prime minister Theresa May has reiterated that the backstop agreement must be temporary and said the British government won’t accept any solution that threatens the integrity of the UK.

Ms May was addressing the House of Commons on Monday a day after Britain and the European Union abandoned efforts to reach a deal on the backstop, which is an insurance policy in the Brexit divorce treaty that would maintain an open Border between the UK and the European Union in Ireland in the event that the two sides don’t solve the issue in a future trade agreement.

After an unexpected, one-hour meeting in Brussels on Sunday with Britain’s Brexit secretary Dominic Raab, EU chief negotiator Michel Barnier said that a week of intensive talks had ended without agreement.

As the stance of British and European negotiators hardened, Taoiseach Leo Varadkar suggested that negotiations to finalise a withdrawal agreement on Brexit could slip into December while Minister for Foreign Affairs Simon Coveney insisted the backstop “can’t be time-limited”.

Addressing politicians in the British parliament before she heads to Brussels for a crucial summit on Wednesday, Ms May said: “People are rightly concerned that what is supposed to be temporary can become a permanent limbo.

“It is frustrating that almost all the remaining points of disagreement are focused on how we manage a scenario which both sides hope should never come to pass and which, if it does, would only be temporary,” she added.

“We cannot let this disagreement derail the prospects of a good deal and leave us with a ‘no-deal’ outcome that no-one wants,” she told a rowdy session of parliament.

She said she did not believe the UK and EU were far apart adding: “This is the time for cool, calm heads to prevail, and it is the time for a clear-eyed focus on the few remaining but critical issues that are still to be resolved.”

She said there had been a “great deal of inaccurate speculation” about how the talks were progressing. She told MPs “real progress” had been made on the withdrawal agreement and the political declaration on future relations. Ms May said progress had been made on Northern Ireland but two problems remain - the EU’s demands over the Northern Ireland backstop and the need for a time limit.

Ms May, who has said repeatedly that she will not countenance a threat to the the United Kingdom or any suggestion that Northern Ireland could be treated differently to the rest of the UK said: “As I have said many times, I could never accept that, no matter how unlikely such a scenario may be.

“So it must be the case, first, that the backstop should not need to come into force.”

“I continue to believe that a negotiated deal is the best outcome for the UK and for the European Union.

“I continue to believe that such a deal is achievable.

“And that is the spirit in which I will continue to work with our European partners.”

Nobody knows for sure

Speaking in Dublin on Monday afternoon, Mr Varadkar said he now figured that “November/December is the best time for a deal”.

Asked does he now see the negotiations not concluding until December, he said: “Nobody knows for sure. The date on which the UK leaves the EU is the 31st of March next year. Any withdrawal agreement requires ratification from EU Parliament and also from Westminster. We have always worked backwards from that timeline.

“[On that timeline] we would really have to have a deal by the end of this year. That was initially October and that has now slipped to November. I don’t want to create the wrong impression that it is now December. That is not what I am saying.

“The possibility remains open that we will have an emergency summit in November if we can get a deal. If we don’t have a deal it will be the regular summit in December,” he said.

The Taoiseach was speaking in O’Devaney Gardens in Dublin 7 where he and Minister for Finance Paschal Donohoe were viewing a site where a mixed development of 700 social, affordable and private houses is currently being built.

“Some people are optimistic about an agreement and withdrawal agreement and protocol this week. I have always said that is unlikely. I figure November/ December is the best time for a deal.

“We are always open to compromise but there are some fundamentals that we can’t compromise on and that is really the need for the UK to honour the commitments it made last December and that is we will have a withdrawal agreement and that withdrawal agreement must include a legally operable, and legally binding, assurance that no matter what happens there will be no hard border between the island of Ireland.”

He continued by saying that a no deal cliff-edge Brexit next March would be “potentially catastrophic, really bad for Ireland, relatively bad for the EU but quite a disaster for the UK.

“You can be sure that the British Government is motivated that we don’t end up with a no deal scenario and so is the EU.

Tánaiste and Minister for Foreign Affairs Simon Coveney has said Ireland expects Ms May to follow through on the commitments she has already made during Brexit negotiations.

Speaking on his way into a meeting of foreign ministers in Luxembourg, Mr Coveney admitted to “frustration and disappointment” at the current impasse.

Britain and the European Union yesterday abandoned efforts to reach a deal on the Northern Ireland backstop ahead of Wednesday’s EU summit, after they failed to agree on whether it should be time-limited.

“I think we are frustrated but we are still pretty calm about that,” Mr Coveney said.

“I think everybody would like to have seen clarity this week on the withdrawal agreement. Time is moving on. Ratification mechanisms are going to take time whether that’s in Westminster or in the European parliament.”

He said there had been a real effort over the last 10 days by the two negotiating teams to intensify engagement so that they could have a set of recommendations for political leaders this week, but that had not proven possible.

“Yesterday the negotiating teams agreed to disengage effectively until after this week’s European Council meeting. That is frustrating and disappointing from an Irish perspective as the country that is more exposed to the fall-out of Brexit than any other EU country, obviously outside of the UK itself.

“So for us we want to see an outcome here that settles nerves that allows us to move ahead with a managed sensible Brexit. I still think it’s possible to do that but clearly it’s going to take a bit more time than many people had hoped.”

Mr Coveney said the Government was not looking for anything new, but wanted to ensure that commitments made last December, “and in particular last March”, were followed through on.

“Last December it was agreed that in the absence of agreeing something better there would be a back stop in place which essentially means that the UK would maintain full alignment with the rules of the customs union and single market, the areas necessary to protect North/South co-operation on an all-island economy and the peace process, or the peace agreement.

“Then in March the commitment was very clear that that backstop would be legally operable in terms of text in the withdrawal agreement and it would be there unless and until something better was agreed.

“So in other words nobody wants to ever trigger the backstop. But it needs to be there as an insurance mechanism to calm nerves that we’re not going to see physical border infrastructure re-emerging on the island of Ireland.”

Mr Coveney said the commitments had been made in writing by the British government, “and what we’re saying is we want no more and no less than the follow through of those commitments.

“And that’s what needs to happen. A backstop can’t be time-limited. That’s new. It hasn’t been there before” as a demand, he said. The backstop was supposed to remain “unless and until something better is agreed”.

The backstop guarantee agreed in the December by the EU and UK is supposed to lapse when the UK reaches a comprehensive agreement with the EU on their future relationship. Ireland is insistent that, as Mr Coveney put it, such an agreement must be “better” than the backstop, or, in other words, provides sufficient safeguards to ensure that the border can remain frictionless.

By insisting instead on trying to time-limit the backstop the UK is indicating clearly that it does not expect any future agreement to reach such a standard.

Mr Coveney said he believed Mrs May was “absolutely genuine” in terms of following through on the commitments that she had made, and that she recognised the complexity of politics in Northern Ireland and on the island of Ireland.

“We expect her to follow through on the commitments that she has already made during these negotiating processes so far.”

Meanwhile, Sinn Féin leader Mary Lou McDonald said it would be wrong for “extreme” Brexiteers to be allowed to dictate policy.

“It would be a chronic miscalculation and an utter disgrace if the policy of the British government was to be set by the most extreme elements of the Brexiteers and the needs and desires and the idiosyncrasies of the Democratic Unionist Party (DUP),” she told BBC Radio 4’s Today programme.

And the DUP’s Brexit spokesman Sammy Wilson has said his party believes a no-deal Brexit is “probably inevitable”.

“Given the way in which the EU has behaved and the corner they’ve put Theresa May into, there’s no deal which I can see at present which will command a majority in the House of Commons.

“So it’s probably inevitable that we will end up with a no deal scenario,” Mr Wilson told the Belfast Telegraph. - additional reporting Reuters, PA, Bloomberg.

1 California shuts down again as US coronavirus cases surge
2 Maureen Dowd: Biden has his limitations but he’s no Trump
3 Covid-19: 200 to 250 people arriving in Ireland from US daily - Coveney
4 US passengers fly into Dublin: ‘I’m here for six days. I guess I’ll have to stay inside’
5 People with foreign accents should not be ‘assumed’ tourists - NPHET
Real news has value SUBSCRIBE