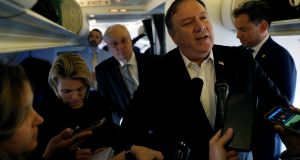 US secretary of state Mike Pompeo speaks to reporters while his plane refuels in Brussels on Wednesday. Photograph: Leah Millis/Reuters

US secretary of state Mike Pompeo said he is prepared to give Saudi Arabia more time to investigate the disappearance of journalist Jamal Khashoggi as he held talks with the Turkish government in Ankara.

Mr Pompeo arrived in the Turkish capital yesterday amid a barrage of new reports in Turkish media detailing what is claimed are audio recordings of Mr Khashoggi’s final moments.

The recordings contained gruesome details of his alleged murder and dismemberment. The accounts were also described by senior Turkish officials to the New York Times. They detail how a team of 15 Saudi agents, some with ties to Crown Prince Mohammed bin Salman, were waiting for Mr Khashoggi when he entered the Saudi consulate in Istanbul on October 2nd to finalise paperwork relating to his forthcoming marriage to a Turkish doctoral student.

The New York Times reported that after he was shown into the office of the Saudi consul, Mohammad al-Otaibi, the agents seized Mr Khashoggi almost immediately and began to beat and torture him, eventually cutting off his fingers.

The report said that as his killers cut off Mr Khashoggi’s head and dismembered his body, a doctor of forensics who had been brought along for the dissection and disposal of the body put on headphones, advised the others to listen to music.

Mr Pompeo declined to comment about the leaked recordings as he met with Turkisn president Tayyip Erdogan and the foreign minister Mevlüt Çavusoglu.

The secretary of state said that he had received a commitment from King Salman and Prince Mohammed in Riyadh on Tuesday that they would “hold anyone connected to any wrongdoing that may be found accountable for that -whether they are a senior officer or official”.

Asked if that included members of the royal family, he said, “They made no exceptions to who they would hold accountable.”

But Mr Pompeo also emphasised the United States’s long-standing economic and political links with Saudi Arabia, adding to speculation that the Trump administration is seeking a way out of the continuing diplomatic crisis that will not compromise its relationship with the kingdom.

“I do think it’s important that everyone keep in their mind that we have lots of important relations, financial relationships between US and Saudi companies, government relationships, things that we work on all across the world,” Mr Pompeo said. “We just need to make sure that we are mindful of that as we approach decisions that the United States government will take when we learn all of the facts.”

Speaking to reporters in the White House in Washington, Mr Trump said the US had asked for the audio recording of Mr Khashoggi’s killing, “if it exists”” “We don’t know if it exists yet,” he said, though he added “[it] probably does”.

“We’ll get down to the bottom of it,” Mr Trump said of the journalist’s disappearance. “I hope that the [Saudi] king and the crown prince didn’t know about it. That’s the big factor in my eyes, and I hope they haven’t.”

Mr Khashoggi had been living in self-imposed exile in Virginia since last year.

Mr Trump denied “giving cover” to Saudi Arabia, telling reporters that he was awaiting a detailed report from Mr Pompeo on his return to Washington on Thursday.

But like Mr Pompeo, he highlighted the United States’s important relationship with the Saudis.

“If you look at Saudi Arabia, they’re an ally, and they’re a tremendous purchaser of, not only military equipment, but other things. When I went there, they committed to purchase $450 billion worth of things, and $110 billion worth of military,” he said. “Those are the biggest orders in the history of this country, probably the history of the world. I don’t think there’s ever been any order for $450 billion.”