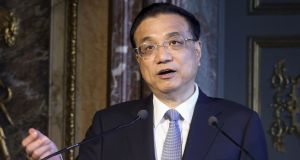 Chinese drug regulators have fined the manufacturer of a rabies vaccine 9.1 billion yuan (€1.1 billion) for producing shoddy products, in a scandal that led to widespread public fears about domestically produced medicine.

The State Drug Administration also stripped Changchun Changsheng Life Science of its licence to make pharmaceuticals and vaccines. The Jilin province-based company was ordered to suspend production back in July.

Penalties imposed on the firm included a fine and the confiscation of illegal earnings. The company’s chairwoman Gao Junfang was detained after the scandal, and 14 executives at the company have been barred from working in the pharmaceuticals industry.

The company was accused in July of falsifying data for a rabies vaccine and manufacturing an ineffective vaccine for babies. The case brought back memories of the baby formula laced with melamine, a kind of resin, back in 2008 which killed six infants and sickened tens of thousands more.

It caused a crisis of confidence in Chinese-made infant formula, and made imported milk powder much sought-after. Angry parents took to the streets outside the National Health Commission and the National State Drug Administration demanding an investigation.

After the scandal, there were calls for the heads of all those involved. The fallout took some high-profile political scalps too, including the mayor of the city where the vaccine manufacturer was based, Changchun, who resigned over the scandal.

The report did not mention what was happening with possible criminal prosecutions of Ms Gao and the 14 other executives.

While no injuries were reported at the time from use of Changsheng Life Science’s vaccines, the company said it would be paying compensation of between 200,000 yuan (€25,000) and 650,000 yuan (€82,000) per person for those affected by the medicine. Authorities ordered a recall of its products from Chinese and foreign markets.

China regularly experiences food and drug safety scandals, despite efforts by the government to try and resolve the problem.

Schoolchildren in China are required to be vaccinated before they are allowed attend school and parents have to give in their children’s medical records for checking. However, since the scandal, Chinese parents said they had no confidence in the vaccinations being given to their children. Some parents bought vaccines from Hong Kong or overseas to ensure the quality.