Backstop a matter of trust as well as principle, Taoiseach says

Arriving in Brussels for the EU summit dinner on Brexit, Taoiseach Leo Varadkar strongly defended Ireland’s case for a backstop that is not time-limited, the issue on which the current Brexit talks impasse hinges. Video: Reuters 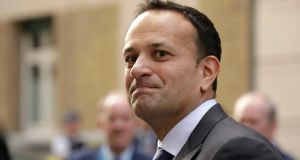 Taoiseach Leo Varadkar in Brussels, on Wednesday ahead of the EU summit dinner. Photograph: AP

The UK’s fulfilling of its commitment to a backstop that is not time-limited is a matter of trust as well as principle, Taoiseach Leo Varadkar has said.

Arriving in Brussels for the EU summit dinner on Brexit, Mr Varadkar strongly defended the Republic’s case for no time limit, the issue on which the current Brexit talks impasse hinges.

The backstop is a guarantee that there will be no hard border on the island of Ireland no matter what the outcome of future trade talks between the EU and UK. The EU side insists that there be no time limit on the guarantee, a key sticking point in the talks.

“It can be temporary by all means,” he said, “but it can’t have an expiry date . . . unless and until we have an alternative agreement that also assures us that we will have no border on the island of Ireland. And that’s what we have in writing . . . so this is not just an issue of principle but one of trust.”

Responding to earlier comments from the Fianna Fáil leader Micheál Martin in which he had pressed the Taoiseach to guarantee there would be no general election ahead of a vote in the Commons on a Brexit deal, Mr Varadkar said he had a difficulty with that:

“I think that that could potentially play into the hands of hardline Brexiteers who would oppose a deal that PM May might put to parliament. Imagine a situation whereby those opposing a deal would be able to say as a result of vote in the House of Commons would not only that deal be defeated but it would also bring down the Irish Government.

He said he was “not sure if deputy Martin really thought that through”.

“I’m sure his intentions were very decent but I don’t think he thought that through strategically.”

He welcomed suggestions being made of a possible extension to the UK’s transition from the EU.

“I think that from Ireland’s point of view we are willing to hear about anything that might help to bring a solution.

“A lot of us feel that negotiating an economic and security relationship between the EU and the UK would be a challenge, and bear in mind you’d have to negotiate this new relationship and you would also have to be ratified by 28 parliaments so that can be quite a challenge to do in two years.”

“So certainly we’re willing to listen to any proposals that might bring us to a solution, but I really need to say that the extension of the transition period couldn’t be a a substitute for a backstop.

“We would still need to have that but perhaps it would allow people to have greater confidence that it would never need to be invoked.”

Mr Varadkar brought a copy of Wednesday’s Irish Times, which featured a story on an IRA bombing of a border customs post in 1972, into the summit dinner to stress to EU leaders the importance of the Border issue for Ireland.

As she arrived to address the other EU leaders before their dinner, British prime minister Theresa May said she believed a Brexit deal was still possible. But fellow EU leaders sounded impatient, signalling that they were ready to listen to Ms May but also preparing to discuss plans for Britain crashing out of the bloc in March without a deal.

Many suggested the core problem was Ms May’s inability to rally her feuding party around a workable set of negotiating demands. EU Brexit negotiator Michel Barnier said weeks of work were needed to crack the problem, promising to approach the talks “calmly and patiently”.

French president Emmanuel Macron said Ms May could help by explaining what her precarious domestic situation would allow her to accept: “Theresa May must tell us what she can possibly accept considering the political balance,” he told reporters.

Austrian chancellor Sebastian Kurz said the ball was in Britain’s court but cautioned against predicting doom.

“It is always the case in negotiations that they are tense and difficult and challenging at the end. That doesn’t mean they will fail. No one wants these negotiations to fail, neither the EU nor Theresa May want a hard Brexit,” Mr Kurz said.

Ms May did not answer a question about whether she had brought the “creative” new proposal that summit chair Donald Tusk has asked for, instead sticking to a rehearsed line that a deal could be done and that it was in the EU’s interest to reach one.

“What we’ve seen is that we’ve solved most of the issues in the withdrawal agreement. There is still the question of the Northern Irish backstop,” she told reporters on arrival.

“By working intensively and closely, we can achieve that deal,” Ms May added. “Now is the time to make it happen.”

Earlier, German chancellor Angela Merkel echoed the tougher tone coming from the 27 other governments, whose leaders will gather over dinner after a presentation by Ms May.

All member states, she said before flying to the summit, must prepare for all outcomes: “That includes the possibility that Britain leaves the European Union without a deal.” – Additional reporting: Reuters