Man in apartment where Grenfell Tower fire broke out is blameless, inquiry hears 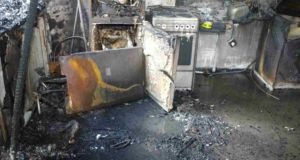 Fire damage to a fridge-freezer inside the kitchen of flat 16 of Grenfell Tower, which was the source of last year’s blaze in which 71 people died. Photograph: Grenfell Tower Inquiry/AFP/Getty Images

Behailu Kebede, in whose Grenfell Tower flat last year’s fatal fire broke out, has been scapegoated by the media and wrongly blamed for failing to raise the alarm, the inquiry into the blaze has been told.

On the 10th day of its hearings, Rajiv Menon QC, representing Mr Kebede, gave a detailed account of events in the early hours of June 14th last year when the fire started in his kitchen in flat 16.

Mr Kebede, who is originally from Ethiopia and had lived in the tower for 25 years, was woken by a fire alarm. He immediately got up to find smoke coming from behind his Hotpoint fridge freezer. He did not see any flames.

“He grabbed his mobile phone and called 999,” said Mr Menon. He had to ring several times before connecting to an operator. At the same time he banged on all his neighbours’ doors on the fourth floor, shouting that there was a fire. “He left the flat barefoot, without his flat or car keys.”

Mr Kebede waited for the fire brigade to arrive and watched the blaze spreading out of his flat windows. “He felt utterly helpless.”

Later that day, he gave a long statement to the police about what happened. “Given all the garbage that has been written about him in the past year,” Mr Menon said, “it’s important to say that he is a significant witness and not a criminal suspect.”

Some papers had even suggested Mr Kebede was responsible for the fire, Mr Kebede’s barrister said. The police at one stage suggested that he needed to go into a witness protection scheme and be given a new identity because he was being harassed so much by the media.

“He’s a good man. He did nothing wrong,” Mr Menon said. “He did the right thing from the start to finish. He just wants to be able to rebuild his life as best he can. He loved his life in Grenfell prior to the refurbishment. It was his first home after moving here from Ethiopia.”

But the refurbishment was another matter. Windows were fitted incorrectly, leaving gaps. There were power surges. The fridge freezer that started the fire was more than five years old, the inquiry heard. It had not been repaired or tampered with.

Accidental fires caused by faulty fridge freezers were not uncommon, Mr Menon said. “Every year in the UK there are around 300. In one tragic case in Neasden, north London, six members of one family were killed in a blaze caused by a fridge freezer catching alight.

Mr Menon turned his attention to the role of the local authority, Kensington and Chelsea borough council. He said: “There’s no coincidence that this fire occurred in a building owned by a Tory authority that has been at the forefront of promoting austerity, cuts and deregulation as well as prioritising business over health and safety.”

His comments provoked an outburst of loud applause, prompting the chair, Sir Martin Moore-Bick, to plead for no further disruptions to proceedings.

Leslie Thomas QC, who represents another group of the bereaved and survivors, said the companies involved in the refurbishment should engage more openly with the inquiry.

“Those responsible for allowing this situation to get to the stage where 72 souls were lost in the most horrendous and awful way, should hang their heads in collective shame,” he said. “Too many tears have been shed. Enough will have been shed for an almighty river of sorrow to flow: lost lives, lost loves, lost opportunities.”

If lawyers representing the bereaved were being prevented from asking relevant questions then the inquiry risked being seen as a “whitewash”, he warned.

Shah Ahmed, the chair of the leaseholders association, had written to the Kensington and Chelsea Tenant Management Organisation two weeks before the fire to request a fire drill, he revealed. Stereotypes surrounding council housing should not be reinforced by the inquiry, Mr Thomas stressed. Those who live there were “not helpless, they were just not helped”.

The right to adequate housing, recognised by the UN’s international covenant on economic, social and cultural rights 1966 , has not been incorporated into UK law, he noted.

“Had the residents been able to enforce their rights to adequate housing then at least some of the fire risks that we know were present would have been identified and rectified before the [blaze].

“An enforceable right to housing would ensure that this most basic of necessities for a fulfilling and healthy life would be protected for all, whatever the shortcomings in the law, policy or practice that regulates housing in this country. It would provide the ultimate fall-back protection.” – Guardian