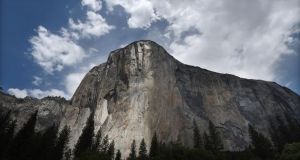 El Capitan, which looms 3,000ft (914 m) above the floor of Yosemite Valley, is considered a world-class challenge for rock climbers. Photograph: Getty

Two climbers fell to their deaths on Saturday from the face of the towering El Capitan granite rock formation at Yosemite National Park in northern California, the US National Park Service said.

The fatal fall occurred at about 8.15am while the pair were scaling the so-called Freeblast route of El Capitan, the agency said.

The park service identified the climbers late Saturday as Jason Wells (46) of Boulder, Colorado, and Tim Klien (42) of Palmdale, California.

No other information on the climbers or how high they were up on the sheer granite rock face was immediately available. Park rangers are investigating the incident.

El Capitan, which looms 3,000ft (914 m) above the floor of Yosemite Valley, is one of the best-known landmarks in the national park and is considered a world-class challenge for rock climbers.

Freeblast consists of the first 10 pitches, or stops, of El Capitan’s Salathe Wall - one of the original technical climbing routes to the top of the sheer granite formation.

A British climber was killed and his wife was badly injured last September when a rockslide from El Capitan rained boulders onto a popular hiking trail.

More than 100 climbing accidents occur in Yosemite every year, and 51 climbers died from traumatic injuries in the park from 1970 through 1990, according to data posted online by the Park Service. – Reuters