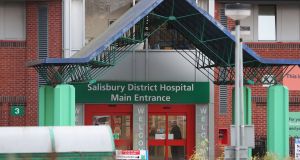 The main entrance to Salisbury District Hospital from which Charlie Rowley has been released. File photograph: Steve Parsons/PA Wire

Charlie Rowley, who was exposed to nerve agent Novichok last month, has been released from hospital.

Mr Rowley (45) was discharged from Salisbury District Hospital on Friday after being admitted on June 30th.

Public Health England said Mr Rowley’s release does not create a risk to the public.

Lorna Wilkinson, director of nursing at Salisbury NHS Foundation Trust, said: “I am pleased to confirm that earlier today, Charlie Rowley was discharged from hospital.”

She added: “We continue to work closely with Public Health England who have advised that Charlie poses no risk to the community.

The poisoning follows that of Russian former spy Sergei Skripal and his daughter Yulia in March. – PA