Syrian army takes control of Quneitra in boost for Assad 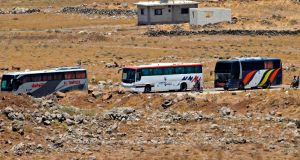 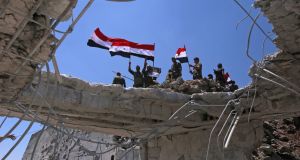 The Syrian army is poised to take control of the town of Quneitra and the area adjacent to the UN-monitored buffer zone along the Golan ceasefire line between Syria and Israel. Buses have arrived to transport insurgent fighters and civilians opting to go to Idlib province in the northwest, which is dominated by al-Qaeda militant group Hay’at Tahrir al-Sham.

On June 19th, the Syrian army, backed by Russian air power, launched a major offensive to recapture Quneitra and Deraa provinces in the south of Syria. Under a deal reached this week, insurgents in Quneitra agreed to hand over heavy and medium weapons and either depart for the north or accept amnesty, disarm and remain.

The Syrian army, police and institutions will take control. Damascus will abide by the disengagement agreement that has kept the peace on the Golan front since 1974. Government allies, Hizbullah and Iran-backed militias are to be excluded from the province and compelled to remain 20km from the UN zone under an agreement reportedly reached by Russian president Vladimir Putin and his US counterpart Donald Trump.

The deal has been accepted by Israel, which had provided aid, guns and money for the insurgents, notably Tahrir al-Sham fighters who appear to have been abandoned.

The brief Quneitra campaign is a major triumph for Damascus. The campaign returns the province to the status quo ante, restores Syrian sovereignty and should stabilise the area, enabling UN observers, including the 130-strong Irish contingent, to maintain the ceasefire and separation of the Syrian and Israeli armies without having to dodge mortars or get caught in crossfire from clashes between warring groups.

The Syrian army’s successful offensive to regain Deraa province, the cradle of the uprising, set the scene for the surrender of insurgents in Quneitra. During the month-long offensive, the government reasserted Syrian sovereignty over 90 per cent of the province and imposed its control along the Jordanian border.

Once the main crossing on the Syrian-Jordanian border opens, Syrians living in government-held areas will have a second entry and exit point. For years the only legal crossing has been on the Syrian-Lebanese border. Jordanians and others will also be able to travel to Syria. Trade can resume. The return to normal life is also an aspect of sovereignty and will boost the morale of Syrians weary of war.

In a bid to pre-empt the return of government rule in Quneitra, the US has announced plans to evacuate to transit camps in neighbouring countries several hundred members of the White Helmets civil defence and media organisation operating in insurgent-occupied areas. White Helmet members and their families are set to be resettled in western Europe, and perhaps Canada.

Founded by former British army officer and security contractor James Le Mesurier in 2014, the White Helmets have won praise for rescuing civilian victims of the war but have been castigated by Damascus and Moscow who accuse the group of acting as a propaganda arm of the opposition.

Meanwhile in the north, this week’s evacuation of 7,000 Shia civilians besieged by Tahrir al-Sham in the villages of Foua and Kefraya located in the centre of Idlib province could herald another Syrian army offensive, backed by Russia, to recapture this province lost by the army in 2015.

Damascus and Moscow argue such a campaign is legitimate as Idlib is dominated by Tahrir al-Sham, which is excluded from ceasefires as it, along with Islamic State (Isis), has been branded a terrorist group by the UN and international community.

The presence of Tahrir al-Sham in Quneitra and Deraa provided justification for the Syrian army’s offensive in the south.