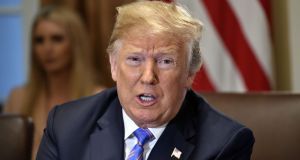 Russian president Vladimir Putin has warned of “serious risks of an escalation” in fighting in eastern Ukraine, as Kiev sought clarification over what he and US counterpart Donald Trump agreed upon during their recent Helsinki summit.

The leaders met for two hours on Monday, with only their interpreters present, and then offered scant information about discussions that alarmed Washington’s European allies as well as many Americans.

Mr Putin told Russian state television that they discussed “new ideas about ways of regulating the conflict in Ukraine”, where four years of fighting between Moscow-led separatists and government troops have killed more than 10,300 people and displaced 1.6 million.

“We agreed to work on this for now on the expert level. In my view, this is a positive element of movement forward,” Mr Putin added.

Mr Trump said nothing about new proposals on Ukraine, prompting Kiev to request “official clarification from Washington about the alleged discussion during the American-Russian summit”, according to an unnamed Ukrainian diplomat quoted by the Interfax news agency.

Before the summit, Mr Trump was distinctly vague on Ukraine and refused to state his position on Mr Putin’s 2014 annexation of Crimea, having reportedly told fellow G7 leaders last month that the peninsula was part of Russia “because everyone there speaks Russian”.

Mr Putin on Thursday fired a fresh salvo at Ukraine, warning that “serious risks of an escalation remain” in eastern regions, due to Kiev’s alleged failure to fulfil its side of the moribund Minsk peace deal.

Kiev’s concerns over Mr Trump’s position on Russia are also fuelled by the US state department’s failure to issue any comment on Tuesday’s fourth anniversary of the shooting down of Flight MH17 over eastern Ukraine; Dutch-led international investigators say the missile fired came from the Russian military.

According to Foreign Policy magazine, a strong statement condemning Russia’s role in the atrocity, which killed all 298 people on board the Malaysia Airlines Boeing 777, was spiked on the orders of US secretary of state Mike Pompeo.

As well as repeatedly changing his tune on whether he thinks Russia meddled in the 2016 US elections, Mr Trump unnerved Nato allies after the summit by questioning the need to defend member states such as Montenegro.

Asked by a Fox News presenter why his son should “go to Montenegro to defend it from attack”, Mr Trump answered: “I understand what you’re saying. I’ve asked the same question.”

“Montenegro is a tiny country with very strong people . . . They’re very aggressive people. They may get aggressive, and congratulations, you’re in World War three,” he said.

Montenegro says Moscow’s agents tried to stage a coup there in 2016 to stop it joining Nato, and the country’s opposition groups seized on Mr Trump’s comments to question its membership of the alliance.

Montenegro’s government said on Thursday that “as a new Nato member and a candidate for the EU membership, it contributes to peace and stability not only on the European continent but worldwide, along with US soldiers in Afghanistan”.

“In today’s world, it does not matter how big or small you are, but to what extent you cherish the values of freedom, solidarity and democracy . . . Therefore, the friendship and the alliance of Montenegro and the United States of America is strong and permanent.”

Mr Trump’s musings on Nato’s collective defence doctrine come a week after Athens expelled two Russian diplomats for allegedly inciting protests against a deal between Greece and Macedonia that would allow the latter to join the alliance.