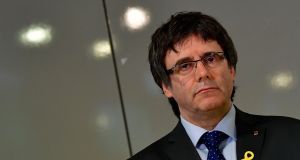 Catalonia’s ousted leader Carles Puigdemont at a press conference in Berlin in May 2018. A Spanish judge has dropped a European arrest warrant for Mr Puigdemont. Photograph: Tobias Schwarz/AFP/Getty Images

Spain’s supreme court has withdrawn a request to extradite former Catalan president Carles Puigdemont from Germany and dropped a European arrest warrant against him.

The move has been prompted by the German judiciary’s decision to allow Mr Puigdemont to be extradited only on a charge related to misuse of public funds, meaning he could not have been tried in Spain for rebellion.

Pablo Llarena, the supreme court judge handling the case, has also withdrawn European arrest warrants issued against five other Catalan politicians who had fled Spain: Toni Comín, Meritxell Serret and Lluís Puig, who are in Belgium; Clara Ponsatí, who is in Scotland, and Marta Rovira, who is in Switzerland.

However, Spanish arrest warrants against them still stand. This means Mr Puigdemont and his former colleagues can travel freely abroad but will be detained if they return to Spain.

The Spanish judiciary wanted to try Mr Puigdemont for his supervision of an outlawed independence referendum on October 1st, 2017. The vote was followed four weeks later by a unilateral declaration of independence issued by the Catalan parliament. Mr Puigdemont fled to Belgium days later.

In March, he was arrested in Germany while returning from a conference in Denmark. The Spanish supreme court initially sought to extradite him for rebellion and misuse of public funds, the latter charge also linked to the organisation of the referendum.

However, the court of Schleswig-Holstein in northern Germany decided that there was not enough evidence of violence to extradite Mr Puigdemont for rebellion, which is the more serious charge and carries a jail term of up to 25 years.

Several of Mr Puigdemont’s former colleagues are in prison in Spain awaiting trial for rebellion. The prospect of the former regional president facing trial only for alleged misuse of public funds prompted the supreme court to drop the extradition process against him altogether.

In outlining his decision, Mr Llarena criticised the “lack of commitment” of the German court, which, he added, had shown itself to be “in the wrong”. The Spanish judge believed the German tribunal’s duty in this case was to find an equivalent to rebellion in its own laws, rather than evaluating the merits of the charges against Mr Puigdemont.

Sergi Sabrià, of the Catalan Republican Left (ERC), wrote on Twitter: “Llarena and the Spanish justice system make fools of themselves again on the international stage.”