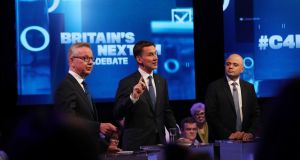 From left: Michael Gove, Jeremy Hunt and Sajid Javid during the live television debate on Channel 4 for the candidates for leadership of the Conservative party. Photograph: PA

Five contenders to replace Theresa May as Conservative leader and prime minister have clashed over Brexit as they jostle to face Boris Johnson in the final round of the contest. Mr Johnson stayed away from the Channel Four News debate, prompting a taunt from foreign secretary Jeremy Hunt.

“Where is Boris? If he can’t face five fairly friendly colleagues, how is he going to deal with 27 EU countries?” Mr Hunt asked.

Mr Hunt joined home secretary Sajid Javid, environment secretary Michael Gove, international development secretary Rory Stewart and former Brexit secretary Dominic Raab. An empty podium for Mr Johnson stood in the centre.   Brexit dominated the debate, with Mr Raab coming under attack from other candidates for refusing to rule out suspending Parliament to push through a no-deal Brexit. They said any such move would be an assault on democracy and on the parliamentary sovereignty Brexit was intended to enhance.

Where is Boris? If he can’t face five fairly friendly colleagues, how is he going to deal with 27 EU countries?

“You don’t deliver democracy by trashing democracy.We’re not selecting a dictator of our country, we are selecting a prime minister,” Mr Javid said.

Mr Raab said that, although proroguing parliament was unlikely, it was not illegal. And he said that only by making clear to the EU that Britain was willing to walk away without a deal at the end of October would Britain have any chance of securing a better deal.

Mr Stewart accused his rivals of engaging in “a competition of machismo” as they sought to show they were the toughest. He compared promising to win a better deal from the EU to his attempt at home to cram three huge rubbish bags into a single bin.   “And my wife said ‘you’re never going to get these three huge bags of rubbish in’. And I was tempted, like Michael, like Dom, to say ‘believe in the bin. Believe in Britain.’ Right? It’s nonsense.” he said.

Earlier, Mr Hunt told the BBC’s Andrew Marr Show that German chancellor Angela Merkel and French president Emmanuel Macron told him they were willing to look at changes to the Brexit deal.

“They have said that they would be prepared to look at a deal that meant we didn’t need a backstop. And what I’m saying is should we not try, I’m not saying this is going to be easy but you know, what they say is, if you’ve got an idea, we don’t have a border with the Republic of Ireland, you do. And if you’ve got an idea then we’ll look at it. And if you approach them with the right prime minister, someone they’re prepared to talk to, prepared to negotiate with, then I think if we unite as a Conservative party we can find a deal that can get through a deal on the 31st of October. We should look and see if there are alternatives.”