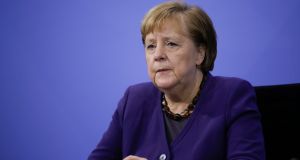 German chancellor Dr Angela Merkel: ‘This is a very difficult situation and we won’t get through the winter with these measures.’ Photograph: Markus Schreiber/Pool/AP

Government sources in Berlin have floated the idea of a lockdown from December 27th to January 10th, to be agreed at an emergency meeting of state leaders this week.

The southern state of Bavaria has already pushed ahead by declaring a state emergency over the virus spread and imposing much tighter restrictions.

After five weeks, Germany’s partial lockdown is widely seen as a failure for having stabilised – but not cut – infection numbers.

“We can’t just keep on hoping for the best,” said Dr Merkel to leading members of her centre-right Christian Democratic Union (CDU) on Monday, according to attendees of the meeting. “This is a very difficult situation and we won’t get through the winter with these measures.”

Her remarks were a swipe at leaders of Germany’s 16 federal states, largely responsible for health matters, who have kept all schools and shops open, closing only restaurants, bars, cultural and sporting facilities.

The German leader sees the measures as so lax as to be a waste of time, a view that has hardened amid weekend images of crowded shopping precincts and mulled wine stands.

Leading medical experts warned on Monday that, without a rapid intervention now, the remaining Advent season will trigger another spike in numbers.

Already Germany’s number of Covid-19 patients in intensive care across the country has soared to more than 4,000 from just over 360 in early October. Germany’s new average seven-day incidence rate is running three times above its own target of 50 new cases per 100,000, with some regions of Bavaria and Saxony, in the east, over six times that.

Both states have announced tighter regulations, with Bavarians only allowed leave their homes for limited reasons, including shopping and sport. As well as a drastic reduction of in-school teaching, areas with high-incidence levels will have a 9pm-to-5am curfew imposed.

“In Germany, someone dies of corona every four minutes, in Bavaria it’s every 20 minutes,” said the state’s premier Markus Söder.

Saxony’s hospitals warned on Monday that they were renting additional refrigeration facilities to house the dead.

By increasing the pressure on her state leader colleagues, Dr Merkel risks shattering a delicate balance maintained in the pandemic. So far northern German states like Schleswig-Holstein, with far fewer cases than Bavaria, has pushed back against further measures.

As Germany mulls another full lockdown, Denmark has followed into a partial lockdown. From Wednesday it is closing until the new year all restaurants, bars, gyms and other sports facilities in 38 municipalities including the cities Copenhagen, Aarhus and Odense.

Over 24 hours at the weekend Denmark, with a population of 5.8 million, recorded a new high of 1,745 new cases – with estimates of 4,000 cases daily by Christmas without drastic intervention.

Meanwhile Austria relaxed its hard lockdown and curfew on Monday, but has urged citizens to leave home only for “the necessary basic needs of life”.