‘The cladding went up like a matchstick,’ says one resident of rapidly spreading fire 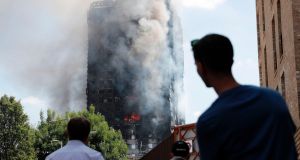 A local London council has admitted receiving complaints over the refurbishment of the west London tower block, which was ravaged by fire in the early hours of Wednesday after an action group said its warnings fell on “deaf ears” when it highlighted safety concerns.

The cause of the huge blaze, which killed at least 12 people at Grenfell Tower in north Kensington, which is owned by the council of Kensington and Chelsea, is not yet known. But residents had been concerned about safety, and Grenfell Action Group said in a blog post in November that “only a catastrophic event” would expose the issues.

The group said there was only one entry and exit to the tower during improvement works at the block in Latimer Road and it had issues with evacuation procedures. After the fire tore through the 24-storey building on Wednesday, the group posted: “All our warnings fell on deaf ears and we predicted that a catastrophe like this was inevitable and just a matter of time.”

The group claimed access to the building was “severely restricted” for emergency services and other vehicles and that residents were advised to stay in their flats in case of fire.

Asked whether the council had received complaints and was acting on them, the leader of Kensington and Chelsea Borough, Nick Paget-Brown, said: “I think that’s going to have to be looked at in even more detail during the investigation behind this.

“Now clearly when you do that, there are difficulties, problems, complaints, logistics to resolve and it is undoubtedly the case that the council received some complaints about the way the work was being conducted.

The tower block was refurbished at a cost of £8.7 million, with work completed in May last year. The exterior of the 1970s-built tower was modernised with cladding and replacement windows, while additional homes were added using vacant space in the building.

But a resident of the 17th floor of the block, identified as Methrob, told LBC Radio the “real issue was when it caught fire to the cladding outside”. He added: “That’s when I noticed the fire from outside when I looked out the window. By the time that we got downstairs, the fire had gone all the way up and it was just about reaching our windows on the 17th floor.

“The whole one side of the building was on fire. The cladding went up like a matchstick.”

Methrob said residents had been concerned about safety, adding there had been warnings “for over a year”. He said one man was “trying to get everyone to get together to do something before it was too late”.

Labour MP Jim Fitzpatrick – chairman of the all-party Parliamentary Fire Safety and Rescue Group – said the government has resisted calls to install sprinkler systems in high-rise blocks in the wake of the Lakanal House tragedy in Camberwell in 2009 in which six people died.

Mr Fitzpatrick, who was a firefighter for 20 years, told LBC: “We’ve been pressing for fire sprinkler systems in buildings where we think it’s appropriate – certainly over a height level and in places where there is vulnerability: care homes and in schools – and government has been resisting that for some time.”