London fire: ‘It was quiet panic. People were completely traumatised’

A resident of the London tower block caught in a blaze early on Wednesday (June 14) morning said smoke was "everywhere" and there were 'people screaming'. The fire broke out just after 0000 GMT. 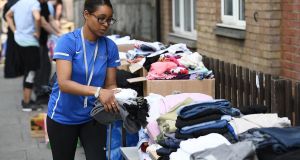 A woman prepares clothes at a stall set up to help people near the burning Grenfell Tower block in west London on Wednesday. Photograph: Carl Court/Getty Images

It was more than eight hours after the fire started but great plumes of creamy grey smoke were still pumping out of the black, charred husk of Grenfell Tower, as fire hoses played against its side. At the Latymer Community Church, volunteers were offering tea, water and shelter to residents who had escaped the fire.

“If anyone has a place for people to stay for a few days, please tell me?” a woman with a clipboard called out.

Yo Haniewicz, who lives around the corner, rushed down to help as soon as she realised what was happening at Grenfell Tower.

“I came rushing down and I brought lots of food and drink. And the first person I saw was a really traumatised woman in a blanket, really shell-shocked. She was looking for her daughter. They’d been going down the stairs and she got separated from her 12-year-old daughter and hadn’t seen her, so she was in a terrible state,” she said.

“It was quiet panic. People were just completely traumatised and there were a few people in the centre where the food is and people bringing clothes and things like that. And there are people inside there, traumatised people. There weren’t enough people actually when I came along dealing with people who knew how to deal with trauma, the right kind of people.”

Part of Lancaster West Estate, a social housing complex of 1,000 homes in West Kensington, Grenfell House was home to between 400 and 600 people. With six flats on each floor, most were two- or three-bedroom units housing families from diverse backgrounds, including many from Morocco and Algeria.

This is one of the poorest wards in London and it is a close-knit community where everyone seemed to know someone living in Grenfell Tower. A few streets away from the smouldering building, Moyra Samuels was comforting another woman, who was sobbing.

“Her uncle is still there, they can’t find him. He’s not on the list and he’s on the 24th floor. There are still people in there,” Samuels said.

She was asleep when her son called her at 1.45am to tell her that there was a fire at Grenfell Tower but when she looked out, it seemed to be a small blaze affecting only a couple of flats. When her daughter called a couple of hours later, the blaze was already engulfing the entire building.

“We came out here about 4 o’clock. I tried to locate a friend of mine who lives there. At 4.30 I got hold of him and in the meantime I’ve just been connecting with people to try and actually build solidarity and get resources for people. That’s what we’re trying to do at the moment. We’re a very tight community,” Samuels said.

Grenfell Tower received a £10 million refurbishment recently, followed by a facelift involving new exterior cladding. Samuels said the residents were pleased with the building’s new appearance, although many were now blaming the new cladding for the speed with which the fire spread.

“The community in the block had endured two years of refurbishment, with trucks and noise and debris. And one of the things they said they’d do is actually put this cladding on, the cladding that people are now people are worried about being the cause of the fire spreading with such speed,” she said.

At a makeshift evacuation centre at St Clement’s Church on Treadgold Street, they were already turning away donations of food and clothing by 10am, although they were still accepting bedding. Outside, a group of exhausted firefighters sat in silence in the middle of the road during a brief break.

Around the corner, a group of women, some veiled and dressed in black were starting to despair about the fate of missing friends in Grenfell Tower. One woman was concerned about a friend who was trapped on the 17th floor with her husband and three children.

“She made a phone call to her sister around one o’clock but the police said ‘close yourself in there, put a towel under the door, everything is going to be all right, we’re going to see what we can do’. And after that at around 4 o’clock, the fire brigade said ‘we can’t go in there any more, there is no chance’. They’re on the 17th floor. How can they survive?” she said.

Another woman said she saw the fire at about 2am but did not realise it was so serious until a few hours later. “I thought it was just a small fire in another tower. I didn’t think it was going to be huge like this. I’ve never seen anything like it,” she said.

“I’m getting no answer from my other friend on the 15th floor. She’s got a heart condition. I’m calling her, no answer.”