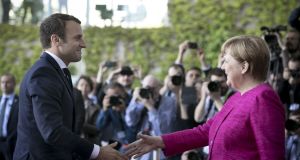 French president Emmanuel Macron is greeted by German chancellor Angela Merkel upon his arrival at the chancellery in Berlin on Monday. Photograph: Axel Schmidt/Getty Images

Newspaper caricatures of Emmanuel Macron show the president of France as the puppet or plaything of Angela Merkel. A lifetime since the second World War, the British in particular still overrate German ambition and under-rate French strength. Nothing can change these views, not the German chancellor’s obvious reluctance as a hegemon, not France’s tenacity in defence of its own interests. It is as though a nation’s performance circa 1940 defines its true self forever.

This complacency about one continental power and paranoia about another leaves Britain unprepared for Macron’s ultimate project: the restoration of Franco-German leadership of the EU. We assume it cannot happen because France is too weak and Germany too keen to dominate, but the first need not always be true and the second has not been true for 70 years.

Macron envisages a grand bargain in which Berlin secures the euro with a fiscal union while Paris agrees to structural reform at home. Such a trade would revive an old relationship that has atrophied through the weakness of his predecessors and the economy they oversaw. If it happens – and the freshness of his electoral mandate gives him a shot – then Britain enters an invidious position.

It has worked for centuries to avoid a concentration of power in mainland Europe. When it failed, as it did before the world wars, Britain paid a blood price. When it failed again in the post-war era, it paid an economic price: a unified continent led by a Franco-German industrial core left Britain for dust until it started to bid for membership of the project in the 1960s.

A coherent, decisively led Europe will always be a problem for Britain. It cannot not be. It has the power to set the terms of access to the continental market and exclude Britain from any influence over events that nevertheless affect it. London’s way around the problem was always to divide and conquer, and it paid handsome returns in recent decades. With its French-style commitment to national powers and Germanic enthusiasm for commerce, it played each country off against the other, alternating alliances between them to craft an EU more to its liking. Hence the single market, the eastward expansion, the bespoke opt-outs.

This trick could have survived Brexit. It is hard to picture a France led by the far-right Marine Le Pen or even a generic Gaullist or Socialist holding a consistent line with Merkel against Britain in the exit talks. British diplomats hoped to encourage splits between the two largest remaining members to extract a better deal. That hope expired when Macron won. They now face a united front.

Both countries want to see Britain incur some material cost for its decision to leave. Both want to lure some banking activity from London. Both want the euro to survive and challenge the dollar. Both are led by politicians who believe populists can be seen off through confrontation rather than capitulation. Both can think of a dozen things they would rather harmonise at European level before they can name one they would return to nations.

Breakdown of the bloc

All of this points to the emergence of a tighter, better-led EU that makes life harder for Britain as it leaves and in the years after. And all of it has become more achievable with the election of Macron.

Britain would not be neighbourly to say so, of course, but once it chose to leave the EU it gained a strategic interest in the paralysis or even breakdown of the bloc. That way the eternal dilemma – what to do about a giant neighbouring trade zone whose rules you observe but cannot shape – would resolve itself. Not only does the restoration of Europe’s central bilateral relationship make that breakdown less likely, it creates the dread prospect of an EU that is actually more coherent after British departure.

The British political class has not adjusted to the challenge posed by Macron. It goes beyond his covetous eye for the City and his hard line on the narrow question of exit, to Europe’s long-term coherence as an entity that Britain will have to continue to deal with. Even in the high summer of relations between France and Germany, when both countries were economic success stories, the former was always cold-eyed in pursuit of its interests.

For generational reasons, Macron might be the first post-national president of France, the first to believe in the European project as an end in itself as well as an alternative instrument for French glory after the eclipse of empire. His dynamism promises a tighter bond between France and Germany, and a Europe that is harder to divide and rule. – (Copyright The Financial Times Limited 2017)