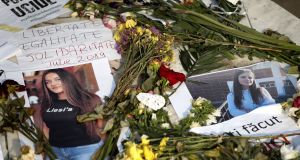 Romanian prime minister Viorica Dancila has sacked her education minister as public outrage continues to swirl around the murder of a teenage girl who called in vain for police help.

Ms Dancila fired Ecaterina Andronescu on Friday for comments she made about Alexandra Macesanu (15), who is thought to have been abducted and killed by mechanic Gheorghe Dinca last week in the southern Romanian city of Caracal.

Macesanu dialled an emergency number three times and told police she had been kidnapped and raped and needed to be rescued, but it took officers 19 hours to find and enter the house where she seems to have been held by Mr Dinca (65).

Police found some of Macesanu’s belongings and unidentified human remains at the property, and Mr Dinca admitted to abducting and killing her and Luiza Melencu, (18) who went missing in Caracal in April.

Results of DNA tests on the remains have not been released, but Romanian media say experts believe the bone fragments are from the body of a teenage girl.

The case has exposed yet again the weakness of vital public services in Romania, where there is deep frustration with the lack of professionalism and rampant corruption that people encounter in their dealings with the state.

Ms Andronescu was dismissed for saying during a television interview: “My parents taught me not to get into a car with a stranger . . . I found out from the school inspectorate that Alexandra had a travel pass. What made her hitchhike?”

Romanians’ anger has focused not only on the police’s failure to rescue Macesanu but also on abysmal public transport in much of the country – which forces people of all ages to hitchhike – and government inaction in other areas.

Ms Andronescu insisted on Friday that her “intention was not to accuse Alexandra or her parents”, but she was sacked as anger grew against a scandal-plagued government that has sought to increase its control over the criminal justice system and weaken anti-corruption legislation.

Ms Dancila said Ms Andronescu’s “profoundly wrong statements” revealed “an attitude lacking in responsibility, which does not reflect the position of the government”.

Romanian media have reported that the deputy police chief in Olt county sought help in finding Macesanu from the leader of a local criminal gang, whose information led police to search properties linked to members of a rival clan.

When police finally found their way to Mr Dinca’s house, they wasted more time by waiting for a search warrant that was not needed in such an emergency.

“Please stay with me on the line, I’m really scared,” Macesanu said in her last call to police, according to a transcript released by relatives.

“I can’t stay on the line with you, miss, I have other calls,” an officer replied.

“Stay there, a police car will come without fail, in two, three minutes . . . calm down, the car is en route.”