Brexit: David Davis pledges to ‘get down to work’ as talks begin

British and European Union envoys have begun a first round of negotiations on Britain's divorce from the EU, with both sides saying it was high time to tackle details. Video: REUTERS 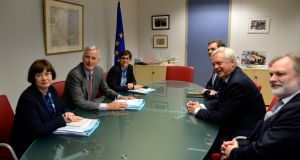 Britain’s Brexit minister pledged to “get down to work” as he kicked off a first full round of negotiations on Monday, but a year after Britons voted narrowly to leave the EU their government seemed at war with itself over the divorce terms.

The future of the border between Northern Ireland and the Republic will be on the agenda for this week’s discussions, which are expected to continue to Thursday.

Prime Minister Theresa May, her authority diminished after losing her majority in a June election she did not need to call, has struggled to control rival cabinet ministers. That worries European Union negotiators who stress that 20 months until Brexit is very little time to negotiate an orderly departure.

“It’s time to get down to work and make this a successful negotiation,” David Davis, the Brexit secretary, said after meeting EU chief negotiator Michel Barnier before their teams began four days of talks.

In London, media was rife with reports of infighting along the lines of the Leave-Remain rifts that May’s Conservative party suffered during the referendum. Her spokesman said she would tell ministers not to reveal cabinet discussions.

Foreign Secretary Boris Johnson, in Brussels for a separate meeting, passed up a chance to deny that ministers were at odds.

His backing helped secure a four-point victory for the Leave camp in June last year. Asked if the cabinet was still “split on Brexit”, Johnson simply said he was pleased negotiations had begun and then defended the offer Ms May has made to protect the rights of EU citizens in Britain.

Finance minister Philip Hammond, who, like Ms May, campaigned last year to keep Britain in the EU, accused unnamed colleagues of trying to undermine what is seen as his push for a “soft Brexit” that prioritises trade rather than hardliners’ demands for controls on EU immigration or an end to EU legal oversight.

Splits in London over basic issues, such as the need for a phased withdrawal lasting for some years, could raise the risk of a failure to reach any deal, EU officials say.

Mr Barnier said, “We will now delve into the heart of the matter”, before the two sat down for a first meeting flanked by the officials who will lead the detailed negotiations.

Pictures showed no notes on the table in front of Davis and his two advisers, in contrast to sheaves of paperwork brought by Barnier and his team. That prompted mockery among critical British commentators who saw it as an image of the government’s failure to prepare for such a vital negotiation.

Mr Davis later returned to London, leaving talks in the hands of the civil servants. Mr Barnier and Mr Davis are to brief the media on Thursday, when they should give political endorsement to whatever officials have managed to agree. Until then, little significant news may filter out from the talks.

Working groups focused on three issues: citizens’ rights; an EU demand that Britain pay billions of euros to cover ongoing EU budget commitments; and other loose ends. Officials were also at work at the World Trade Organization in Geneva to disentangle Britain from the EU’s WTO membership.

A fourth set of talks is focused on addressing problems in Northern Ireland once a new EU land border divides the island.

Dozens of officials from both sides are involved, some shuttling among meeting rooms scattered over nearly half the floors of the European Commission’s 13-storey Berlaymont headquarters, fuelled, one said, by EU coffee and biscuits.