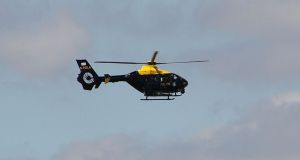 The police helicopter crew used a powerful video camera to film a couple having sex in their garden, the court heard.

British police used a police helicopter to film a couple having sex in their back-garden, while another woman was filmed sun-bathing in the nude with her daughters, a court has been told.

The police helicopter crew used a powerful video camera to film a couple having sex in their garden, naturists on a campsite and people sunbathing naked, Sheffield Crown Court was told.

The woman filmed sunbathing nude with her daughters in her garden said she felt “sick” at thought of being recorded and it was “a complete and utter violation” of her privacy.

Prosecutors outlined details of the helicopter crew’s alleged activities as the trial of two police officers and two pilots got under way at Sheffield crown court on Tuesday.

Richard Wright QC, prosecuting, told the jury: “They used the unique viewing position afforded to them, together with the powerful video camera with which the helicopter is equipped, to video members of the public engaged in private activities in a gross violation of their privacy.

“On three separate occasions, they filmed a total of five people sunbathing naked in private and, on another occasion, they filmed a couple having sexual intercourse in their own garden.”

The court heard that Adrian Pogmore (50) formerly of South Yorkshire police, used his position as an air observer to film his swinger friends having sex on the patio of their suburban house.

The “brazen” couple “put on a show” for the officers hovering above, the court heard. The woman involved waved at the aircraft at one point during the eight-minute recording as she and a man wearing only a Manchester United shirt engaged in a range of sex acts and sexual positions.

As Wright showed the jury the graphic footage from July 2008, he said: “As you will see in a moment, the couple who were filmed on this occasion were very much aware that they were being observed; indeed, they seem to relish it.”

The prosecutor explained that the couple were friends of Pogmore, who has already pleaded guilty to misconduct in a public office and did not attend the trial.

Wright told the jury: “The reason that this couple are so happy to be recorded engaging in sexual intercourse is that they are friends of Mr Pogmore and shared his sexual interest in the swinging scene.

“It was clearly, therefore, no coincidence that the helicopter orbits around their garden while they brazenly put on a show.

“You may hope that the police helicopter is chasing down criminals and keeping the community safe.

“You may never imagine that in fact it is being used to film a pair of swingers in the throes of sexual passion for the entertainment of the crew.”

Matthew Lucas (42) and Lee Walls (47) who are serving South Yorkshire police officers, Malcolm Reeves (64) a retired pilot, and Matthew Loosemore (45) a former pilot with the force, deny misconduct in a public office and, “in short”, blame Pogmore for the filming.

Footage of naturists on a campsite was also shown to the jury, as well as two recordings of people sunbathing naked.

Footage shot in August 2007 appeared to involve the aircraft circling a garden where a woman was sunbathing nude on a lawn.

Wright said the woman was with two daughters, aged 18 and 15, who were wearing bikinis, and an eight-year-old daughter who appeared to be fully clothed in the footage.

“There is self-evidently no legitimate policing purpose connected to orbiting her home and using equipment to film her naked body,” he said.

There was no legitimate police purpose for flying over the homes in any of the four recordings, he told the court.

“This was a deliberate invasion of their privacy for, at the very least, the inappropriate amusement of the crew, and at worst, for their sexual gratification,” Wright said.

The prosecutor told the jury that it may hear attempts to trivialise what happened as “isolated incidents of laddish conduct”, but he added that the people who were filmed did not see it that way.

Wright said the prosecution stemmed from recordings found in Pogmore’s desk drawer at a police station in 2015.

The trial is expected to last three weeks.