Polly Toynbee: A second Brexit referendum would be a disaster 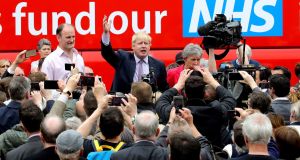 Boris Johnson and Ukip’s Douglas Carswell on the campaign trail ahead of the Brexit referendum. ‘A crude question divides a nation, driven by emotions not on the ballot paper, paralysing politics for years to come.’ File photograph: Christopher Furlong/Getty Images

Confirmation bias is everywhere. You are what you read – and you read stories that confirm who you think you are. So Guardian types find their eyes, desperate with hope, drawn to the crescendo of signals that Brexit can’t and won’t happen, to stories that say the sheer impossibility of leaving the EU gets clearer by the day: no way can Britain be out in March 2019, that’s a political and practical non-starter.

Fall off the EU cliff and put a third of our just-in-time food supply at risk . No flying to the EU, warns Ryanair, as easyJet moves its new headquarters to Austria, amid warnings tickets will carry no-fly warnings in the event of hard Brexit.

Facts on the ground make the case day after day. Project Fear is made flesh as our economy sinks, while the EU’s charges ahead. Bloomberg lists 10 economic signs warning that “Britain is near a tipping point”. Car sales are down 10 per cent, credit card debt up 10 per cent, wages are falling behind rising inflation. Even right-wing leavers take fright at an exit from Euratom, risking not just the whole nuclear industry and medical isotopes used to treat cancer, but one of Britain’s few cutting-edge research projects on fusion.

The French and Germans are embarking – without us – on a new fighter jet programme, leaving out the 5,000 BAE Systems engineers whose current Eurofighter Typhoon work is ending. HSBC is moving offices to Dublin, Barclays to Paris. All this and much more is happening right now.

But the real world never impinged on Brexiteers’ wild imaginings. None of this touches their faith, and warnings only rekindle their fury. The explosive split in the cabinet shows that they will fight all hint of compromise, even if it brings down their party: they’ve done it before to one leader after another. They couldn’t even wait for negotiations to start before bursting out against their soft Brexit chancellor.

Owen Paterson, the former minister and now backbench headbanger-in-chief, told the BBC Today programme on Monday that as a “sovereign nation” the UK should not have to pay a penny to trade with the EU, branding the idea “discriminatory”, echoing Boris Johnson’s “go whistle”. That’s where these absolutist “no dealers” stand. Not a penny to smooth a path to single-market and customs-union trading, because they want none of it, however low or high the price. The government’s more sensible faction should proceed without trying to meet them halfway, because they are implacable impossiblists.

“We will now delve into the heart of the matter,” Michel Barnier, the EU’s chief negotiator, proclaimed as the talks began, with no clock ticking – just a time bomb. Every industry is sending up distress flares, each finding the greatest obstacle is Theresa May’s adamant rejection of the European court of justice (ECJ).

Here’s an example of how industries will try to finesse and finagle their way past her ECJ ban. For some reason Michael Gove and other Brexiteers regard the EU clinical trials directive with particular abomination, claiming that escaping it will spur drug innovation. That’s not the industry’s view, says the Association of the British Pharmaceutical Industry: research into rare diseases needs the large EU population for joint trials, so it is planning how to stay within the directive’s regulation while sneaking around May’s ECJ barrier. Its “elegant solution” is to license a new drug in Brussels under the ECJ, but with a duplicating UK authority, pretending we are not obeying the ECJ. Similar expensive tricks will abound. And that is the paradigm for where an entire untidy Brexit compromise may end up.

Tony Blair says Brexit need never happen. If only he had made that pitch in his old Sedgefield seat, trying to convince Brexit-minded constituents. The great persuader should try his skills on people like the elderly man at the 31 bus stop I argued with the other day.

“Why aren’t we out, right now? Just out! Control our borders.” He didn’t want to know the details: air travel, medicines, food, car parts – with a wave of the hand he said, “Oh, well, we can sort all that, make deals, can’t we?”

Should we pay money to make those deals? “If we have to.”

What about immigration, would letting in EU people with jobs be worth those deals? “Maybe. So long as they have jobs.”

But he was unbending on the big question: “We voted out.” Opinion polls show softening attitudes, yet the referendum stands there as a boulder blocking the pass, ignored at our peril.

One solution is a long, perhaps never-ending compromise. Andrew Adonis, whose House of Lords speech fired up the anti-Brexit peers, says lawyers are taking a case to the ECJ to declare that article 50 can be revoked. That’s the view of Lord Kerr, article 50’s author. The UK could revoke it just before the March 2019 deadline, as a temporary measure to delay exit, in transition time. Even David Davis agrees with the need for transition time, as the fiendish complexity of everything finally dawns. There we will sit in the transit lounge, inside the European Free Trade Association alongside Norway, which has lived frozen in a state of perpetual transition ever since Norwegians voted against joining the EU in 1994.

Staying in the single market and customs union might be bought at a price – and Blair is not alone in sensing the chance for a slight shift in free movement rules. What is shocking, says Adonis, is that Davis is so determined to leave both the single market and the customs union that he has not even bothered to ask for the change in free movement rules that might let us stay.

Indefinite limbo is no visionary battle cry, and will satisfy no one: Brexiteers will always be implacable. But it could turn out to be the least worst option, and so long as we are no better off outside the club, the EU might accept a messy compromise, saving us from calamity. We will obey rules over which we have no power, but all alternatives look worse. Elections will come and go, but at some future date Britain may vote for a government that advocates returning, humbled, to an EU that may itself look changed. Not inspiring, but avoiding Armageddon.

But never try another referendum. Haven’t we learned that lesson the hard way? A crude question divides a nation, driven by emotions not on the ballot paper, paralysing politics for years to come. If your confirmation bias draws your eyes only to stories that tell you the tide is turning, cast your eyes occasionally at how Murdoch, the Mail and the Telegraph still ply their venom. They would still be there, poisoning the air, in a second referendum.

1 Could Ireland put towns under lockdown if coronavirus arrived?
2 Dublin man may have been stabbed to death by woman in parking space row
3 IRFU seek meeting over call to postpone Ireland-Italy match
4 Irish in Italy on coronavirus: ‘The city is in a bit of panic – the streets are empty’
5 Coronavirus: Irish holding back on holiday plans
Real news has value SUBSCRIBE