Analysis: Final days of election campaign have not gone to plan for UK prime minister 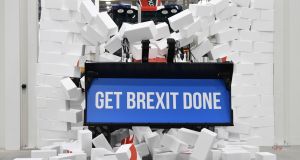 Boris Johnson drove a bulldozer through a brick wall marked “gridlock” on Tuesday, his campaign’s idea of a metaphor for the promise to unblock parliament and get Brexit done. They were not real bricks but polystyrene replicas and the JCB digger emblazoned in the colours of the Union flag wasn’t really a bulldozer.

And as it turns out, the British people don’t believe Johnson is really going to get Brexit done if he wins a majority on Thursday. YouGov reported on Tuesday that 69 per cent of voters believe politicians will have to focus on Brexit as much or more than now if Britain leaves the EU on January 31st.

The final days of the campaign have not gone according to plan for the prime minister, who faced criticism on Monday for refusing to look at a picture of four-year-old Jack Williment-Barr lying on the floor of a hospital emergency department because all the beds were occupied. On Tuesday, David Merritt, whose son Jack died in a terrorist attack in London last month, accused Johnson of seeing his death as a political opportunity to score points in the election rather than as a tragedy.

“I know it’s a very kind of fevered atmosphere and news is moving fast and both sides are trying to score points off of each other. But this wasn’t really an election issue. You know, the election issues of the NHS and Brexit and all these other things. It just struck me as being crass and insensitive,” Merrick told Sky News.

Johnson did have a lucky break in the shape of a leaked conversation in which Labour’s shadow health secretary Jon Ashworth said his party had no chance of winning the election and that traditional Labour voters in parts of the country “can’t stand” Jeremy Corbyn.

The leak was embarrassing for Labour and especially for Ashworth, who offered an explanation of byzantine complexity that he was engaging in banter and reverse psychology to persuade his Conservative interlocutor that Labour was doing less well than it really is.

Fortunately for Labour, few voters have heard of the shadow health secretary and fewer still follow the details of campaign strategy he was discussing in the leaked call. Less comforting to Corbyn is the fact that in a private conversation they did not know was being recorded, at least half of his parliamentary colleagues would have said exactly what Ashworth did.