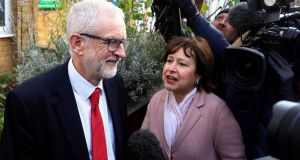 Jeremy Corbyn announced he would not lead Labour into the next election after losing a swath of seats in the party’s northern heartlands to the Tories amid its most devastating election result in nearly a century.

Mr Corbyn refused to set a date for his departure but is expected to stay in post for long enough to oversee what is likely to be a bruising contest to pick his successor.

Members of the party’s left-wing leadership tried to blame a combination of Brexit, the mainstream media and disloyal centrist MPs as they struggled to react to the crushing result.

But other candidates said the result vindicated repeated warnings since Mr Corbyn became leader in 2015 that his lurch to the left would be electoral suicide.

Gareth Snell, who lost in Stoke Central, blamed Mr Corbyn for the “disastrous” performance and said he needed to resign.

Phil Wilson, who lost his seat of Sedgefield – once held by former prime minister Tony Blair – said it was “mendacious nonsense” to suggest that Brexit was the root cause of Labour’s setback. “Jeremy Corbyn’s leadership was a bigger problem. To say otherwise is delusional,” he said.

Labour had hoped to repeat the turnaround of 2017, when the party gradually whittled down a huge Tory poll lead. Instead the party lost 59 seats, finishing with just 203 – its worst result since 1935.

Even Michael Foot produced a better outcome in Margaret Thatcher’s Tory landslide of 1983, picking up 209 seats.

A series of seats in Labour’s leave-voting northern industrial heartlands fell like dominoes as voters turned against the party over its leadership and its ambiguous position on Brexit. They included Great Grimsby, Bassetlaw, Leigh, Wrexham, Darlington and Workington.

Meanwhile in Scotland – where it held 41 seats only a few years ago – it was almost entirely routed.

Attention will now switch to a leadership race between “true Corbynistas” who would maintain the party on its hard-left trajectory and those who would tack back towards the centre ground.

Richard Burgon, shadow justice secretary, said Labour should not swerve from its path. “Johnson must continue to be fought with radical alternatives, not triangulation, that challenge the Tories head-on,” he said.

But Siobhain McDonagh, the Blairite candidate for Mitcham and Morden, laid the blame squarely on Mr Corbyn. “This is one man’s fault. His campaign, his manifesto, his leadership,” wrote Ms McDonagh on Twitter, adding Mr Corbyn’s name.

Campaigners across the country found huge hostility to the veteran left-winger on the door steps.

As the scale of Labour’s defeat sank in during the early hours, former Labour home secretary Alan Johnson launched a blistering attack on Mr Corbyn’s leadership.

Sitting alongside Jon Lansman, a key ally of Mr Corbyn, Mr Johnson let rip. “Go back to your student politics . . . I feel really angry about this, that we persevered with Corbyn,” he raged on television. “We knew he was incapable of leading. We knew he was worse than useless.”

Mr Johnson, a former MP, was a senior cabinet minister when New Labour was in power from 1997 to 2010. But for the last nine years the party has been floundering in the wilderness: this result represents Labour’s fourth general election defeat in succession and a leap backwards from 2017.

Mr Corbyn emerged from nowhere in 2015 as the reluctant left-wing candidate for the leadership but his hardline views caught the imagination of the membership. Labour has been flooded by vast numbers of new members who share Mr Corbyn’s politics.

By contrast his personal ratings with the wider UK public have plumbed previously unseen depths.

In the summer of 2016, he faced an unsuccessful rebellion by the vast majority of his own MPs who called on him to quit.

“I feel sick to the pit of my stomach,” said one pro-Corbyn candidate as the news sank in. “This is a devastating night,” said Lucy Powell, a Manchester MP.

Karie Murphy, who ran the day-to-day campaign, had pushed for an approach of going on the offensive: Labour poured resources into scores of seats held by the Tories. The party only stepped up its defence of existing seats in the closing days of the election.

Neither Mr Corbyn nor his closest aides will be keen to relinquish their grip on Labour and allow a possible slide back towards the centrist New Labour movement when the party won elections but – to their horror – private involvement in the public sector was encouraged and the US invasion of Iraq endorsed.

They will be pushing younger, less familiar left-wingers such as Rebecca Long-Bailey and Richard Burgon. Laura Pidcock, who was thought likely to win the support of the union Unite, lost her seat of North West Durham amid the political carnage.

But other party figures might seek to guide Labour back in a less radical direction. Strong contenders from the “soft left” could include Emily Thornberry, the shadow foreign secretary; Keir Starmer, shadow Brexit secretary; or backbenchers such as Jess Phillips or Lisa Nandy.

Pat McFadden, who held Wolverhampton South East with a majority of barely 1,000, said: “The biggest mistake we could make right now would be to get rid of Corbyn and carry on with Corbynism with a new face and voice. We need not just a new leader but a new direction.” – Copyright The Financial Times Limited 2019