EU leaders agree on climate neutrality by 2050 without Poland 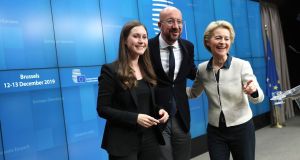 EU leaders were claiming leadership of the global fight against climate change with the endorsement of a commitment to climate neutrality by 2050 after a debate that ran into the early hours of Friday morning.

The EU summit also vaulted another major political hurdle by setting in train its post-Brexit planning in the wake of the British election victory for the Tories and the now-virtual certainty the United Kingdom will leave the bloc on January 31st. The absence of the British from the summit – engaged elsewhere – gave a taste of what such meetings may become like in a not-too-distant future.

Commitment to the climate “goal” was unanimous by member states, but, as EU Council president Charles Michel explained, “implementation” was agreed at unanimity-minus-one – Poland entered a reservation to meeting the target because of its huge dependence on coal.

The European Commission was given the green light to move ahead with its ambitious Green Deal of investment, sectoral action plans and legislative programmes to place climate change firmly at the centre of all its work. Among the proposals endorsed by leaders was a “Just Transition Mechanism” to assist states like Poland which are particularly fossil-fuel dependant.

“We’ve had intensive discussions today and can say that we can all commit to the goal of achieving climate neutrality by 2050,” German chancellor Angela Merkel told reporters before leaving the summit. Poland, she said, “couldn’t commit today on how to do the implementation, and so we decided to get back to the issue in June next year.” By which time there will be “legislative proposals by the commission” pushing for climate neutrality, she added.

Leaders were unwilling to put cash figures on the mechanism, to the chagrin of the Poles, until they embark properly on the logjammed 2021-‘27 EU budget talks which got only the most cursory of attention at the meeting. The hope is now that a deal can be brokered at a special summit in February. At that stage, it is hoped, Poland will be brought fully on board the climate agenda.

Leaders managed to bring the Czech Republic on board with a specific “conclusions” reference to some member states meeting their climate transition targets by means of nuclear power. But there will be no new money forthcoming for nuclear plants.

It was being sold as a signal from the member states that the EU is not just preoccupied with internal issues but determined increasingly to champion a distinctive multilateralist agenda on the world stage in the face of Trump’s America First and China’s growing power.

There is some scepticism, however, among member states about this particular project, a Jean Claude Junker idea, with more than one senior diplomat observing that “you can’t legislate an international standing for a currency”.

The meeting was a first outing for former Belgian prime minister, now Council President, Mr Michel, who chairs – and steers – the leaders’ meetings and takes on an onerous programme of work, most immediately as the key broker of what he describes without exaggeration as the most difficult budget negotiation process in the history of the EU.

His reputation as a domestic pragmatic broker of compromise was confirmed at the summit by his creative climate target formula and will be sorely tested in the months ahead.