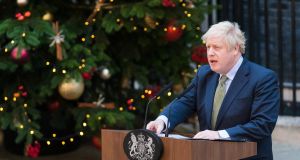 Boris Johnson has called on both sides in the debate over Brexit to “let the healing begin” after a landslide election victory that has redrawn the political map of Britain. Speaking outside Downing Street, Mr Johnson said he had won an overwhelming mandate to deliver Brexit but he promised not to ignore Remainers’ positive feelings about Europe and to build a new partnership with the EU.

“I frankly urge everyone on either side of what after 3½ years, after all an increasingly arid argument . . . I urge everyone to find closure and to let the healing begin,” he said.

Mr Johnson won the Conservatives’ biggest victory since Margaret Thatcher in 1987, with an 80-seat majority that could make him Britain’s most powerful prime minister since Tony Blair. Labour had its worst result since 1935 and Jeremy Corbyn said he would be stepping down as leader.

Liberal Democrat leader Jo Swinson lost her own seat in East Dunbartonshire and the party returns to Westminster with just over half the number of MPs it left with last month. The Scottish National Party (SNP) were the other big winners after the Conservatives, taking 48 of Scotland’s 59 seats.

There were also dramatic political shifts in Northern Ireland. For the first time, more nationalists than unionists were elected to the House of Commons, notwithstanding that Sinn Féin refuses to take its seats.

The DUP dropped from 10 to eight seats, its most wounding and symbolic loss the defeat of deputy leader Nigel Dodds by Sinn Féin’s John Finucane in North Belfast.

Claire Hanna for the SDLP took South Belfast from the DUP’s Emma Little Pengelly with another big majority of more than 15,000 votes while Alliance deputy leader Stephen Farry won Lady (Sylvia) Hermon’s former seat of North Down, where the DUP was hoping to make a gain.

The Northern Ireland Westminster arithmetic now is: DUP – 8; Sinn Féin – 7; SDLP – 2; Alliance – 1. This means nine nationalists, eight unionists and one centre-ground politician elected to Westminster. Moreover, the DUP now holds just one of the four Belfast seats – East Belfast. In 2017 it won three of the four.

The North’s five main parties pledged to work with the British and Irish governments to try to restore Stormont in the talks beginning on Monday. DUP leader Arlene Foster acknowledged her party’s poor results and, in an exercise in humility on Friday night, tweeted to the public: “We’re listening.”

Taoiseach Leo Varadkar has warned against moves towards a united Ireland in the wake of the election result. Speaking at a summit in Brussels, where EU leaders acknowledged the UK would now leave the union in January, Mr Varadkar said while the “tectonic plates” were shifting in the North, the focus should be reviving the North’s powersharing institutions, rather than pushing for a united Ireland.