WHO criticises Tanzania for withholding information on suspected ebola cases 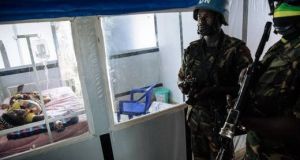 UN soldiers at an ebola treatment centre in the North Kivu province of the Democratic Republic of Congo. Photograph: Alexis Huguet/AFP/Getty Images

The World Health Organisation (WHO) has publicly criticised Tanzania for withholding information on suspected cases of ebola, complicating the battle against what is already the second worst outbreak of the deadly disease in human history.

In a statement on Sunday the WHO said that, despite repeated requests, “to date clinical data, results of the investigations, possible contacts and potential laboratory tests performed... have not been communicated to the WHO”.

The disease has already infected nearly 3,000 people, and killed nearly 2,000 in the volatile eastern region of the Democratic Republic of Congo, where the epidemic has been concentrated. There endemic violence and mistrust of authorities have prevented authorities from bringing it under control.

Last month a nine-year-old girl died of ebola in Uganda, which neighbours Congo, marking the fourth case in that country. However, unlike Tanzania, Ugandan authorities were quick to share information with the WHO and to mobilise international forces to prevent the spread of the disease.

Because ebola is transmitted through human contact, speedy and reliable information is crucial in fighting its spread.

Last week Tanzania’s health minister told the UN agency that the death of one person with ebola-like symptoms and the illness of others was not caused by ebola.

“The two patients did not have ebola,” Ummy Mwalimu told reporters, according to Reuters. “There is no ebola outbreak in Tanzania as we speak. People should not panic.”

However, the WHO said that Tanzania had not provided any data to back its assertion, defying what have become routine procedures in the fight against the haemorrhagic disease.

“The limited available official information from Tanzanian authorities represents a challenge,” the WHO said in a statement. “This followed earlier rumours of the death of one person and illness in a few others. Tanzanian authorities did not indicate what the cause of the illnesses might have been.”

Under John Magufuli, Tanzania’s president since 2015, the government has taken a combative and often opaque stance on a wide range of issues from freedom of expression and teenage pregnancy to foreign investment.

Mr Magufuli’s government has arrested prominent critics, clamped down on social media and briefly threatened the arrest of homosexuals before an international outcry forced it to back down.

Authorities have never been in a better position to combat ebola given their experience with previous outbreaks and the existence of at least two vaccines that, if administered quickly, can prevent the onset of the disease in people exposed to the virus. In Congo some 200,000 have been vaccinated.

In 2013-2014, the west African countries of Guinea, Liberia and Sierra Leone suffered the worst outbreak of the disease in history when more than 11,000 people died.