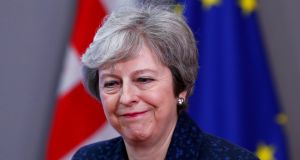 A source said Tory MPs are worried about a no-deal Brexit, but want to give Theresa May time to conduct negotiations. Photograph: Reuters/Francois Lenoir

A crunch vote in which MPs could force Theresa May’s hand on Brexit is set to be delayed until the end of the month or even later, it has emerged.

Under the timetable agreed by the government, the British prime minister must either present a revised Brexit deal to the commons next Thursday, which appears unlikely to happen, or else table a motion to which MPs can add amendments.

In a similar process just over a week ago, the commons supported Mrs May’s attempt to renegotiate the Irish backstop but voted down amendments tabled by cross-party alliances of Brexit-sceptic MPs that would have extended article 50 and given parliament more control.

It had been expected the MPs would try again on Thursday if Mrs May did not return with a deal. But sources close to the group, led by the Tory MP Nick Boles and Labour’s Yvette Cooper, said it seemed likely that the prime minister would be given more time to discuss a Labour Brexit proposal and hold more talks with Brussels.

“The Tory MPs are keen to give the PM a chance to follow up on the cross-party talks, and negotiations with the EU,” the source said. A Bill laying out how MPs could seek to avoid a no-deal departure might nonetheless be published next week, they said.

“There’s a definite sense that lots of Tories are worried about no deal, but they don’t want to look like they are trying to obstruct her negotiations,” the source said. “There is very definitely a majority in parliament against no deal, but it’s a question of how to proceed and when."

The Liberal Democrat MP Norman Lamb, who supported the last Cooper-Boles amendment, told the Guardian: “Our position is that the ball is in the PM’s court. What we do depends on what the PM does.”

Any further delay would be contingent on Mrs May promising a future date for either a vote on her deal or another amendable motion, he said, adding: “Parliament has to have its say.”

It sets the scene for an increasingly tense couple of weeks in which Mrs May will attempt to stitch together a Brexit plan that can get a parliamentary majority while the EU and backbenchers watch the clock tick down towards March 29th.

After a bruising set of talks in Brussels on Thursday in which the European Council president Donald Tusk mentioned Labour leader Jeremy Corbyn’s proposals as a way of breaking the impasse, Mrs May was meeting the Taoiseach, Leo Varadkar, for a dinner in Dublin on Friday night.

Mrs May has yet to formally respond to Mr Corbyn’s letter on Wednesday in which he said Labour would support her Brexit deal if she makes five legally binding commitments, including joining a customs union.

Separately, Brexit campaigner Nigel Farage announced on Friday that he would stand as a candidate for a new “Brexit Party” to contest European Parliament elections if Britain’s departure from the EU is delayed past March 29th.

“The party was founded with my full support and with the intention of fighting the European elections on May 23rd if Brexit has not been delivered by then,” the former Ukip leader wrote in an opinion piece published by the Daily Telegraph. – Guardian/Reuters