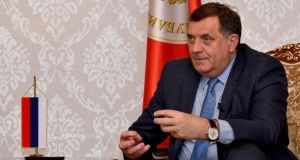 The United States has criticised Bosnian Serb officials for launching new investigations into atrocities committed in Srebrenica and Sarajevo during the country’s 1992-1995 war, as they continue to deny that their ethnic kin were guilty of genocide.

Former Bosnian Serb commanders and soldiers have been convicted over the 1995 massacre of some 8,000 unarmed Bosnian Muslims at Srebrenica and the 44-month siege of Sarajevo, which was the longest such ordeal to be inflicted on a major city in modern history.

Yet Bosnian Serb leader Milorad Dodik – like many Serbs – rejects rulings by the International Criminal Tribunal for the Former Yugoslavia and the International Court of Justice that the Srebrenica massacre was genocide, and he believes the number of wartime Muslim victims has been exaggerated and Serb suffering ignored.

Mr Dodik is the prime mover behind the creation of two commissions, led by Israeli academics and to include several other foreign members, which Serb officials say will bring rigour and balance to the study of Bosnia’s bloody recent history.

Bosnian Muslim (Bosniak) officials denounced the move as revisionism and warned that it would deepen rifts in ethnically divided Bosnia amid fresh threats from Mr Dodik to seek independence for its Serb-run Republika Srpska region.

“Everyone should respect court decisions and bravely face and accept the truth, regardless of how painful it was,” the US embassy in Sarajevo said on Friday, according to Bosnia’s N1 news service.

The US also reiterated condemnation of decisions by Republika Srpska’s parliament last year to quash a 2004 report recognising Bosnian Serb crimes committed at Srebrenica and to call for a new study into those events.

At the time, US state department spokeswoman Heather Nauert called the vote “a step in the wrong direction” for Bosnia and “part of wider efforts to revise the facts of the past war, to deny history and to politicise tragedy”.

“It is in the interest of the citizens of Republika Srpska to reverse the trend of revering convicted war criminals as heroes, and to ensure their crimes continue to be publicly rejected,” she added.

Former mayor of Srebrenica Camil Durakovic called the move “a waste of time and financial resources. It is a political act, not a true approach to the analysis of the past.”

“This is one of the final stages of genocide – revisionism and an attempt to equalise and erase historical facts,” he added.

The pro-Russian Mr Dodik recently renewed threats to seek secession for Republika Srpska if Bosniak politicians went through with a legal bid to change the name of his region, which they claim discriminates against Bosnia’s Muslims and Croats.

The leaders of neighbouring Serbia broadly share Mr Dodik’s views on Srebrenica and, during Russian president Vladimir Putin’s visit to Belgrade last month, Serbian president Aleksandar Vucic thanked him again for blocking a UN resolution drafted by Britain in 2015 to condemn the massacre as genocide.