Brexit withdrawal agreement ‘allows us all to move on’, says Coveney 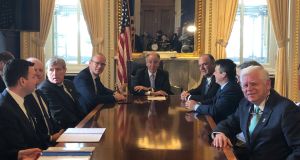 Minister for Foreign Affairs Simon Coveney has said he believes that Britain can leave the European Union with a deal before March 29th if there is a “change in approach from the parliament in Westminster” after Theresa May suggested in Brussels that she would deliver Brexit “on time”.

Speaking in Washington following meetings with key figures on Capitol Hill and within the Trump administration, Mr Coveney said there was a “good deal” on the table that was “ready to go”. The current withdrawal agreement “deals with the complexity of Brexit in a very comprehensive way and it allows us all to move on”.

“If they are looking for changes to the future relationship they can do that too but that will probably take time to negotiate. But if they are looking to reopen the withdrawal agreement I don’t believe that that is going to be facilitated by the EU and they are the parameters within which we need to solve this now.”

He said that the prime minister “is right to force a realisation that the decision needs to be made now that yes, can be good for Britain, but also has to take account of the concerns that the EU has. The British parliament next week can move this process on dramatically if they want to. If they find they can’t do that then time continues to move on and we get closer to that deadline and the pressure continues to build.”

‘Needs to be a plan’

He said that if Britain asks for more time, Ireland certainly would not stand in the way of that, but there “needs to be a plan that goes with that request so we can bring this thing to a conclusion, because the uncertainty around Brexit and the political divisions around Brexit are something that we all have an obligation to move on from”.

Mr Coveney, who leaves Washington on Thursday following meetings with key figures in Congress and within the Trump administration, said that Irish concerns about Brexit were now well understood. “I think that is understood in the real heart of power in Washington now and I would be surprised if that view wasn’t heard clearly in London,” he said.

Speaking following a conversation with acting White House chief of staff Mick Mulvaney, Mr Coveney said: “I think he understands only too well the fragility of the peace process and certainly agrees that Ireland cannot be collateral damage because of a Brexit deal that doesn’t take account of the obligations of the British and Irish governments to protect a peace process, to protect an all-island economy that reinforces that peace process.

“Of course the Border question is very much at the centre of that issue.”

Mr Coveney also met US secretary of state Mike Pompeo, another key figure in the Trump administration, outlining Ireland’s concerns about the need to protect the peace process, as well as members of the Friends of Ireland caucus on Capitol Hill.

At an event in the US capitol building on Wednesday night, senior figures in Congress warned Britain that its hope of striking a trade deal with the US after Brexit could be in jeopardy if the Belfast Agreement is compromised.

“If the British want to consider any type of trade agreement with the United States it is important that the soft border is maintained,” Republican congressman Peter King said at an event to mark 100 years of the Dáil.

He continued: “What influence we have, we will use it, in the Friends of Ireland. We will definitely speak out.”

His warning was echoed by Richard Neal, the Massachusetts congressman who was recently appointed chairman of the Ways and Means committee. The committee has sweeping powers over US trade policy, and would have ultimate oversight of any trade agreement signed between the US and Britain after Brexit.

Mr Neal said that concerns about the Belfast Agreement would “weigh on his mind” if the committee were considering such a deal.

He said he had already outlined his concerns to the US trade representative, Robert Lighthizer, although he ultimately wanted a trade deal between the US and United Kingdom.

“I think that America is heavily invested in the success of the Good Friday Agreement and anything that might disturb the success that America offered certainly would not be welcomed, that’s for sure. I think there are few parts of American foreign policy that have worked as well as being an honest broker in the run-up to the Good Friday Agreement, so we take great satisfaction in what happened and undoing it for a problem that appears as though the British government got themselves into, I think would be a step backwards.”

Mr Neal also commended the Irish Government for the stance they have taken in the Brexit negotiations. “The way that the Irish Government has remained so firm on that Border is so gratifying to us here,” he said, noting that all parties in Ireland and Northern Ireland except one were unified on the issue.

“It is extraordinary that that Border has been as successful as it has been and there might even be a debate about going back to checkpoints,” he said.

Philadelphia congressman Brendan Boyle pointed to the difficulties of getting the transatlantic trade and investment partnership (TTIP) and the Trans-Pacific Partnership (TPP) trade deals through Congress in the past.

He said: “Regardless of the Irish dimension, the idea that suddenly there is going to be overnight a big trade deal with the UK really just isn’t practical.”

Former congressman Bruce Morrison also warned Britain about the difficulties ahead in negotiating a trade agreement with the US, something Brexiteers see as a benefit of leaving the EU customs union. The US is Britain’s main trading partner outside the EU bloc, and exports to the US are worth an estimated 100 billion pounds to the British economy each year.

“I think the British have made a lot of assumptions about trade agreements with the US and with other countries and frankly, from a hard-headed economic standpoint, dealing with the EU is a lot more important than dealing with Britain, so I think they have an uphill slog on that,” Mr Morrison said.

“They’ve been talking to themselves and not talking to others in thinking how great it’s going to be to be out of the European Union.”