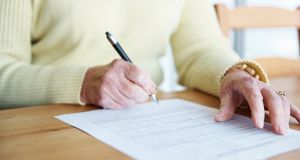 The Irish in Britain organisation said ‘a lot of uncertainty and concern’ remained about what would happen to social welfare payments - particularly pensions - for Irish people living in the UK after Brexit. Photograph: iStock

Access to social welfare payments for Irish citizens living in the UK, and UK citizens in Ireland, will be “guaranteed” after Britain exits the European Union under a new legally binding agreement signed between the two governments.

Minister for Employment Affairs and Social Protection Regina Doherty is expected to bring a motion to the Dáil next Tuesday to begin the process of ratifying the agreement.

Under the pre-existing Common Travel Area arrangement, which predates both Ireland and the UK’s EU membership, Irish and UK citizens have reciprocal rights and privileges living in each other’s jurisdictions, including the freedom to work and study, and to receive access to healthcare, education and social security benefits, including pensions, child benefit and maternity benefit.

A “technical notice” published by the British government last September said Irish citizens in Britain would continue to enjoy all their current rights under the CTA, even in the event of a no-deal Brexit on March 29th.

But Irish in Britain, an umbrella organisation representing Irish charities and groups across the UK, said “a lot of uncertainty and concern” remained about social welfare payments - particularly pensions - among their members, the majority of whom are over 55 years of age.

The document signed this week by officials in the Irish Department of Employment Affairs and Social Protection, and the UK’s Department for Work and Pensions, “ensures that the rights of UK and Irish citizens living and working in each other’s state are protected after the UK leaves the EU,” according to a statement on the UK government’s website.Workers will still only have to pay into one social security scheme at a time, and certain benefits will still be eligible to be exported between the UK and Ireland.

The agreement also ensures that social security contributions paid by UK and Irish citizens can be used to meet entitlement criteria for benefits in each other’s state,” the statement said.

This means that an Irish person who has made social insurance contributions while working in the UK will benefit from them in the future whether they are accessing social welfare payments while living in the UK or back in Ireland.

Irish in Britain has had a number of meetings with the UK Home Office in recent months to discuss their concerns over social welfare payments. The organisation’s chief executive Brian Dalton said its members would welcome the formal agreement.

“We are pleased that particular thought has been given to the Irish community here, and that an effort has been made to provide clarity on this issue,” he said.

“There is such a large Irish community here, we are considerable stakeholders.”

Crosscare Migrant Project, an organisation that works with Irish emigrants and returnees, also welcomed the deal, but said “more clarification on the practical implications” was needed.

“We have received queries from Irish citizens currently living in the UK concerning rights to entitlements, and from those considering a move to the UK concerning transfer of current payments,” Crosscare’s policy officer Danielle McLaughlin said.

“Clients are particularly concerned about the future implications on qualifying for a State Pension (Contributory) or their entitlement to a UK pension following Brexit.”