Labour leader says the government has lost control of the virus, and is no longer following scientific advice 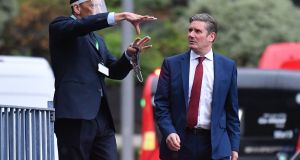 The Labour leader said Boris Johnson’s government had lost control of the virus, and was no longer following scientific advice.

“There is no longer time to give the prime minister the benefit of the doubt. The government’s plan simply isn’t working. Another course is needed,” Sir Keir told a press conference in London.

The prime minister this week announced a three-tier system of local lockdowns, but chief medical officer Chris Whitty said even the highest level of restrictions were inadequate. And it emerged on Monday night that the government’s scientific advisory group Sage called last month for a circuit-breaker lockdown.

Sir Keir said schools would remain open, but if the measure was introduced now it would coincide with the mid-term break which starts next week.

“It would mean only essential work and travel. That everyone who can work from home should do so. Non-essential offices should be closed. Household mixing should be restricted to one household except for those who’ve formed support ‘bubbles’.

“And all pubs, bars and restaurants would be closed for two to three weeks – but compensated so that no business loses out because of the sacrifices we all need to make,” he said.

“A circuit break would also provide an opportunity to reset and to rectify some of the mistakes the government has made. In particular to get a grip on testing and hand over track and trace to local authorities.

A circuit break will have to be accompanied by extensive support for jobs, businesses and our local economies.”

Until now Labour has criticised the government’s handling of the pandemic, notably its failure to introduce a fast and effective test, trace and isolate system, but it has backed all decisions on lockdown restrictions.

Sir Keir appealed directly to the prime minister to back the circuit breaker, promising Labour’s support for it in parliament and telling him he did not need to balance the needs of your party against the national interest.

“We’re at a tipping point. But if we act now – if we follow the science and break the circuit – we can get this virus under control. If we don’t we could sleep-walk into a long and bleak winter. That choice is now for the prime minister to make. I urge him to do so.”

Mr Johnson said on Monday that he would not introduce a nationwide lockdown that would “shatter” the economy. However, Sir Keir said the economic cost of failing to control the virus would be greater than the short-term cost of a brief lockdown, adding that the government’s tiered approach would have to be ramped up week after week because it would be ineffective.

In the House of Commons on Tuesday, Conservative backbenchers criticised the government’s three-tier policy as too restrictive, and Bolton West MP Chris Green resigned from a junior government post in protest against the policy.

“The Bolton lockdown has clearly not worked, and I believe that the cure is worse than the disease,” he said.

Health secretary Matt Hancock rounded on critics of lockdown in his own party, telling them the only alternative to suppressing the virus was to allow it to expand exponentially. He said pursuing herd immunity was not an option, noting that many infectious diseases, including measles and malaria, never reach herd immunity.

“If we let this virus continue unchecked the loss of life would be simply too great to contemplate. We know that it would put our NHS at risk,” he said.