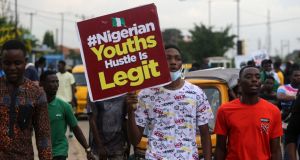 A protester holds a placard at a demonstration against the Nigerian rogue police, the Special Anti-Robbery Squad, in Ikeja in Lagos. Photograph: Akintunde Akinleye

Nigerians are continuing to protest against police brutality and rampant exploitation, days after President Muhammadu Buhari issued a directive saying the scandal-plagued Special Anti-Robbery Squad (SARS) had been dissolved with immediate effect.

“The disbanding of SARS is only the first step in our commitment to extensive police reforms, in order to ensure that the primary duty of the police, and other law enforcement agencies, remains the protection of lives and livelihood of our people,” Mr Buhari said on Monday.

Protests against the police unit have been raging for more than a week, after footage was circulated showing two limp men being dragged from a Lagos hotel, and one of them being shot in the street.

At least two people – a civilian and a police officer – have been killed during subsequent demonstrations, which have spread across the country. Police have been accused of firing live ammunition at protesters, as well as using tear gas and water cannons.

Online, the hashtag #EndSARS has been trending globally.

Even if the squad is shut down, victims question where its officers will be redeployed to. They also point out that a lot of brutality over the past week has been carried out by officers from other units.

In June, an Amnesty International report, Time to End Impunity, documented at least82 cases of extra-judicial execution, torture, or other ill-treatment by SARSARS officers, over three years . Many victims still had scars or bruises, which were seen by Amnesty’s researchers. Some had broken teeth or bone fractures after beatings with machetes, sticks or exhaust pipes. Others had been locked up for weeks and denied food.

None of the officers responsible has yet been prosecuted, despite anti-torture legislation passed in Nigeria in 2017, Amnesty said.

“The systemic use of torture and other ill-treatment by SARS officers for police investigations and the continued existence of torture chambers within the Nigerian Police Force points to an absolute disregard for international human rights laws and standards.”

These are not the first protests against SARS. In October 2019, The Irish Times reported on the complaints of Nigerian tech workers against SARSARS officers, who would target them and accuse them of being so-called “Yahoo boys”, or internet scammers.

Nigeria is Africa’s most populous country, with over 200 million people, more than 60 per cent of whom are under 25. Youth unemployment is a significant problem, yet businesspeople complain police extortion prevents them from creating more jobs.

“We are seeing more engineers leaving the country, and [SARS] – among a few other things – [is] the reason being given,” Bosun Tijani, chief executive of the technology-focused Co-creation Hub in Lagos, said last year. “To sustain our industry, we need the government to act.”