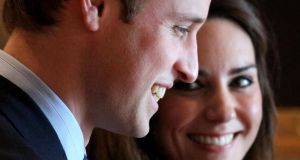 England’s Prince William photographed which Kate Middleton during a visit to the St Andrews Museum in 2011. The News of the World hacked voicemail messages from the prince to Ms Middleton, a court was told today. Photograph: Andrew Milligan/PA Wire

The News of the World hacked voicemail messages from Prince William to Kate Middleton, including one in which he “nearly got shot” by blank rounds in an army training exercise, a court has been told.

Transcripts of intimate and private messages left by the British prince while he was training at Sandhurst military academy in which he call Kate, his future wife, “baby” and “babykins” were read to the jury in the hacking trial at the Old Bailey central criminal court in London today.

The intercepted voicemails produced a string of exclusives for the paper including one headlined “Harry aide helps out in Sandhurst exams” and another revealing that William was out “beagling”.

It is the first time the now-defunct tabloid, owned by Rupert Murdoch, has been accused of illegally intercepting the voicemails of anyone directly related to one of the royals.

Up to now it has only been known that royal household staff were hacked by the paper, leading to the conviction of the News of the World’s former royal editor, Clive Goodman, and the private investigator used by the paper Glenn Mulcaire in 2007.

Transcripts of the voicemails were uncovered at the time of their arrest in 2006 but have not been revealed in public before.

The judge in the phone-hacking trial deemed the voicemails both admissible and relevant because they could be directly linked to stories by Goodman published by the News of the World.

In the first voicemail transcript the jury heard, Prince William left a message telling Kate he had just finished training and told her how he had nearly got shot in an ambush on a dummy exercise.

He starts by saying “Hi baby”, and then goes on to explain his day.

“I had a busy day today again. I’ve been running around the woods of Aldershot chasing shadows and getting terribly lost, and I walked into some other regiment’s ambush, which was slightly embarrassing because I nearly got shot. Not by live rounds but by blank rounds, which would be very embarrassing though.

“Um, er, yeah, I’m off on exercise tomorrow morning, just for the day, and then I’m back on Saturday first thing, erm, so I probably won’t be able to speak to you tomorrow night.”

He then told her he might send her “a cheeky text message” because he might have his phone with him before signing off: “All right, baby, lots of love, um, speak to you soon. Bye bye.”

An internal News of the World email later sent by Goodman to colleagues subsequently helped identify a resulting story for the paper, telling them “William shot in ambush”.

The News of the World subsequently ran a story in the Blackadder column edited by Goodman with the same headline.

The other transcripts included one in which William addresses Kate as “babykins”.

This nickname then appeared in an “exclusive” by Goodman on February 12th 2006 which went on to say that “Wills wants the girl he calls ‘babykins’ to be his princess”.

In another voicemail, William told Kate he was going to secretly get away from Sandhurst and was hoping to get to her parents’ house.

He said he was going to “try to go beagling today and then I’m going to try to come to you afterwards”.

In an email shown to the jury Goodman told the then News of the World editor Andy Coulson about the prince’s plans for beagling, noting that this is a story as leave is not allowed at Sandhurst. He added: “No leave for first five weeks, going to be dead tricky to stand up.”

On a later date the prince called Kate and left a message telling her he is “planning on coming out about sevenish, so I will be with you about 7.45”.

In an email Goodman told his then news editor Ian Edmondson: “He was due to leave 7pmish” and is planning to see Kate. “From the inf [SIC]I’ve got, it looks like he is going to her parent’s house near Reading” because his “ETA” wouldn’t give him enough time to make it to her London flat.”

The jury heard that Prince Harry’s phone was also hacked. They were told of an unidentified male voice phoning the prince, putting on a female voice and pretending to be Chelsy Davy, his then girlfriend who was holidaying in South Africa.

“He puts on a false voice and tells how much he misses Harry,” the prosecutor Andrew Edis QC told the jury, adding that he also called Harry “Ginger”.

A story in the News of the World headlined “Chelsy tears strip off Harry” included a reference to a phone call in which she told him how much she missed him and called him “Ginger”. Readers were told that Harry “sees the funny side”.