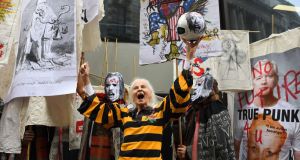 Vivienne Westwood outside the Old Bailey, London, ahead of a hearing in WikiLeaks founder Julian Assange’s fight against extradition to the US. Photograph: Stefan Rousseau/PA Wire

WikiLeaks founder Julian Assange has appeared at the Old Bailey at the start of an extradition hearing on an 18-count US indictment that accuses him of recruiting hackers to steal military secrets.

Wearing a dark suit, tie and white shirt, Mr Assange (49) sat behind a glass security screen at the back of the court, his glasses pushed back on top of his head.

Before coming into court, he had been formally re-arrested on the new US indictment which updates and broadens previous charges. All but one are for violations of the country’s Espionage Act.

Asked whether he was prepared to consent to be extradited to the US, Mr Assange replied: “No.”

The district judge Vanessa Baraitser commented: “That was the response I was anticipating.”

There were no opening statements by either parties. The indictment says Mr Assange and WikiLeaks “repeatedly sought, obtained, and disseminated information that the United States classified due to the serious risk that unauthorised disclosure could harm the national security of the United States”.

It said: “Assange designed WikiLeaks to focus on information restricted from public disclosure by law, precisely because of the value of that information.

“To recruit individuals to hack into computers and/or illegally obtain and disclose classified information to WikiLeaks, the WikiLeaks website posted a detailed list of ‘The Most Wanted Leaks of 2009’, organised by country.”

At the start of the hearing, both sides released detailed “skeleton” arguments, setting out their legal claims.

The one submitted by James Lewis QC, acting for the US authorities, runs to 99 pages along with the 48-page “second superseding indictment”. The two-part skeleton argument written by Edward Fitzgerald QC, representing Mr Assange, runs to almost 200 pages.

In his submission, Mr Lewis accused Mr Assange’s lawyers of conducting a defence consisting of “an attack upon the president of the United States [which] ignores the institutional competencies of the agencies relevant to this case, the constitution of the United States and the independence of its courts”.

It also said the defence was inaccurately “treating Assange as though he were engaged in reporting, in the same position of any journalist who comes into possession of classified information”.

Mr Fitzgerald’s submission asserted that the prosecution was “being pursued for ulterior political motives and not in good faith”.

Mr Fitzgerald argued that the US authorities were misrepresenting the facts “in order to bring this case within the bounds of an extradition crime” by suggesting that Mr Assange had materially assisted the US whistleblower Chelsea Manning in accessing national security information, and that there had been a reckless disclosure of the names of particular individuals.

Explaining the short delay to the start of proceedings Mr Fitzgerald said this had been the “first time in six months” he had managed to see his client.

The case is being heard at the old Bailey with lawyers, observers and the media spread out across several other courts listening to proceedings via videolink.