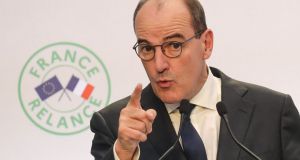 The French word for recovery rhymes with France, which gave the government the snappy name of France Relance for an ambitious €100 billion Covid recovery plan presented on Thursday by prime minister Jean Castex.

The funds are to be disbursed over 2½ years through 70 programmes. The largest segment, €36 billion, will go to “social and territorial cohesion”, meaning money for the provinces and to alleviate unemployment.

The second largest tranche, €34 billion, is to promote the competitiveness of French businesses, mainly through tax reductions.

The third, the most innovative part of the plan, will devote €30 billion to the transition to a decarbonised economy. It was hailed by minister for the environment Barbara Pompili as “a giant step” for ecology.

The announcement was almost boastful, couched as it was in “my plan is bigger than your plan” terms.

Mr Castex said his recovery fund was the most substantial ever in French history, four times greater than one created by former president Nicolas Sarkozy during the 2008 financial crisis.

French media pointed out that the Castex plan is in fact three times greater than Sarkozy’s, but with such staggering amounts of money who is counting?

Mr Castex also noted that the plan was “the most massive announced to date by a big European country, proportionate to national wealth”. Some 40 per cent of the French programme will be financed by the EU’s Covid €750 billion recovery fund, approved by the European Council in July.

The UK’s recovery fund is the equivalent of €33 billion. At €130 billion, Germany’s is greater than France’s in absolute terms, but Germany’s GDP is €900 billion larger, according to France Info radio. Italy and Spain have not yet completed their Covid economic support programmes.

France will not lower VAT to relaunch consumption because such cuts mainly benefited imports in the past. French citizens have hoarded an estimated €100 billion during the pandemic. The government hopes to encourage them to spend by promising not to raise taxes.

Before the pandemic, Mr Castex said: “We had brought unemployment down to less than 8 per cent. We had become the most attractive of all European countries [to investors].”

Some €30 billion for environmental transition is intended to keep France on track to fulfil its commitments under the 2015 Paris accords. The largest rubric is €11 billion for transport, which will be spent on railways, “everyday mobility” and clean cars.

About €4.7 billion will be spent on rail freight, small railway lines and night trains.

The state-run SNCF railway is badly in need of an overhaul. Only this week 2,500 passengers on several high-speed trains from southwest France to Paris were trapped on board for up to 20 hours because of electrical failures.

Another €1.2 billion will fund bicycle lanes and public transport.

More than €6 billion will be spent on energy efficient buildings; two-thirds in the public sector, one-third on private dwellings.

Greenpeace pointed out that much of the €43 billion in aid already given to big French companies went to polluting industries such as airlines and automobile manufacturers.