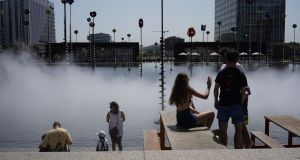 The La Defense business district in Paris, on Friday. Europeans fought to stay cool over much of Europe as concerns grew about climate change. Photograph: Martin Barzilai/Bloomberg

Europe’s hellish heatwave is forecast to crack further meterological records at the weekend as, on Friday, France recorded its highest-ever temperature of nearly 46 degrees.

French forecaster Météo-France said temperatures in the southern town of Gallargues-le-Montueux hit 45.9 degrees, hours after Villevieille in Provence hit 45.1 degrees. The previous record, 44.1 degrees, was reached in 2003, during a heat wave that claimed about 15,000 lives.

Météo-France meteorologist, Etienne Kapikian described as “historic” the first recorded temperature above 45 degrees in the country.

The ski resort of Val D’Isere – at an altitude of 1,850m – also experienced its highest-ever recorded temperature of 29.2 degrees.

President Emmanuel Macron forecast an “adaptation of society and its habits”.

“We will need to change our... way of working, build differently,” he said at the G20 meeting in Osaka.

Prime minister Edouard Philippe said measures had been taken to protect the elderly, infirm and ill but appealed to citizens not to take chances.

“Given the intensity of the heat wave, it’s the entire population who must be careful today,” he said.

At least four people are known to have died in France so far from heat-related conditions while in Spain, a 93-year-old man collapsed and died in Valladolid, near Salamanca. In Córdoba, to the south, a 17 year-old died of heat-related effects after jumping into a pool to try to counteract heatstroke.

Temperatures in Spain topped 40 degrees in many regions on Friday, including Girona in Catalonia, where firefighters continued to tackle raging wildfires.

Catalan authorities say the blaze is the worst the region has seen in two decades, with flames fanned by hot air drawn in from northern Africa threatening up to 20,000 hectares.

In total, 11 provinces in the east and centre of Spain have experienced unseasonal heat of above 40 degrees, rising to up to 45 degrees in the northeast.

Major Italian cities have issued weather alerts as Milan authorities said heat may have been a factor in the death on Thursday of a 72-year-old homeless Romanian man found near the city’s central train station.

In Bolzano, South Tyrol, German-born Irish artist Imogen Stuart stepped off an air-conditioned train from Munich on Friday afternoon and into 42 degree heat.

“It’s like standing in front of a fireplace,” she said.

Further north in Germany, most cities were granted a short heat reprieve but temperatures of up to 40 degrees are looming at the weekend in some areas.

A climate study institute in Potsdam, outside Berlin, has said Europe’s five hottest summers since 1500 have all been in the 19 years so far of the 21st century.

Down in Vienna, city fathers took pity on horses drawing the tourists in fiaker carriages around town. With temperatures of up to 37 degrees by Monday, Viennese horses are joining their fiaker colleagues in Salzburg and Innsbruck in shady stables.

The moral of the story in Austria: if you’re looking for a ride, there’s no horse outside.