The 2019 Glastonbury music festival is basking in hot sunshine as the main stages opens and organisers encourage revellers to put on sunscreen and drink plenty of water. Video: Reuters 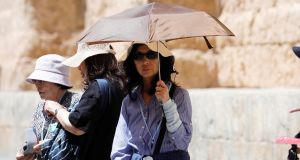 Tourists protect themselves from the sun in Los Naranjos courtyard of the Mosque-Cathedral of Cordoba, Spain on Thursday. Photograph: EPA/Salas

France registered its highest temperature since records began on Friday as a sweltering heatwave engulfed much of southern and central Europe, weather forecaster Meteo France said.

Two people have died in Spain, as Europe continues to face a sweltering heatwave.

Four departements in southern France were placed on emergency red alert on Friday, the first time the measure has covered such a large area. The mercury hit 45.1 degrees Celsius in Villevieille, in the southerly Provence region, and temperatures reached 44.3 degrees in Carpentras, in the southern Vaucluse region.

Hundreds of schools have been closed and others have asked parents to keep children at home if possible. Middle-school exams have been postponed until next week.

In Spain, a 17-year-old boy died from heatstroke in the early hours of Friday after becoming unwell when working in the countryside in the Cordoba province of Andalucia. He is reported to have gone into convulsions after jumping into a swimming pool to cool down. Doctors were unable to save him and he died in hospital.

The second victim was an 80-year-old man who died on Thursday after collapsing from what is thought to have been another case of heatstroke in the city of Valladolid. Two other people are being treated for heatstroke in Spanish hospitals.

With temperatures expected to reach up to 42 Celsius on Friday, Spain’s meteorological office has issued a red alert in parts of Catalonia, Navarre and the Basque country. Hundreds of firefighters in Catalonia are battling to bring a huge wildfire under control, which has so far burned through 6,500 hectares of land and could consume as many as 20,000.

Larger cities on or near the French coast, such as Marseille, where sea-breezes mean slightly lower temperatures, opened museums for free on Friday for people to seek refuge in air-conditioned spaces. Many municipal swimming pools also opened for free. A record high of electricity consumption for summer was recorded as homes plugged in fans.

The health minister, Agnès Buzyn, urged what she called “those in denial of extreme heat” to avoid “risky behaviours”. She urged people not to jog between noon and 2pm and said parents should not under any circumstances leave children in cars.

Other French cities have battled to deal with high air pollution levels by limiting car traffic, including Paris, Lyon, Marseille, and Strasbourg in the east.

The French president, Emmanuel Macron, warned that the extreme weather is likely to become more frequent as a result of global warming. “We will need to change our set-up, our way of working, build differently,” he said, stressing a necessary “adaption of society and its habits”.

This week, an independent report found France was falling behind on tackling the climate emergency and failing to reduce greenhouse gas emissions, despite ambitious promises.

In the Italian city of Milan, a 72-year-old homeless man was found dead at the main train station after falling ill due to the heatwave, the local authorities said.

As Germans attempted to cool off amid scorching temperatures, at least four people died in bathing accidents in different parts of the country on Wednesday.

Parts of Britain are also expected to experience hot temperatures this weekend. A 12-year-old girl drowned in a river as hot weather conditions continue across the UK. Greater Manchester Police said the girl was found by underwater search teams after officers were called to the River Irwell in Bury just before 8pm on Thursday. The UK is set to see the hottest day of the year so far this weekend. Temperature could reach a maximum of 34 Celsius in London and the east of England on Saturday. The hottest conditions recorded in 2019 so far were at Weybourne in Norfolk on June 2nd, where the temperature reached 28.8 Celsius.

Scientists have said Europe’s 2019 heatwave, like last year’s, is closely linked to the climate emergency and that such extreme weather events will be many times more likely over the coming decades. - Guardian