MP lashes out at Boris Johnson, saying British PM has ‘degraded’ the union 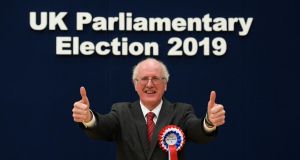 The British prime minister, Boris Johnson, has “degraded” the union, the DUP MP Jim Shannon told his supporters after comfortably retaining his seat in the Strangford constituency.

Mr Shannon received 17,705 votes in the heavily Leave-leaning constituency, well ahead of the next candidate, Kellie Armstrong, of the Alliance Party.

Speaking after his win, Mr Shannon lashed out at Mr Johnson, claiming he had “degraded and downgraded” the union of the United Kingdom. “I suppose the best way to describe Boris Johnson – and this is for the record – he would take your Alsatian dog for a walk, he’d get back an hour later and he’d give you a chihuahua and he’d say it was all right,” Mr Shannon said.

The criticism was a barb at Mr Johnson’s Brexit withdrawal agreement, which many in the DUP view as reneging on previously negotiated red lines to refuse any customs checks in the Irish Sea. The Conservative majority in the House of Commons means the British government will no longer need the DUP’s votes to pass legislation. “So we need to convince Boris Johnson of the importance of the union,” Mr Shannon said.

“This election was about many things, and the Northern Ireland Assembly not functioning as it is was number one. Number two was the union, and for the people that I met was preserving the union,” he said.

Mr Shannon, who has held the seat since 2010, said the DUP would “do our best to work with the Conservative Party”. He referred to the biblical story of Gideon’s army of 300 men who took on a much larger force. “So be under no illusions: whatever number the DUP go back with, our DUP ones will make their voice heard.”

Turnout in the Strangford constituency was 56 per cent, and Mr Shannon had not been seen as under threat to lose the seat. Ms Armstrong polled well for the Alliance Party, with 10,634 votes; Philip Smith of the Ulster Unionist Party received 4,023.