‘This is Brexit land’: Belfast judge puzzled by Gove’s attitude to law 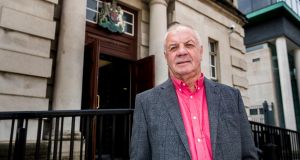 A senior judge has described as remarkable a senior UK cabinet minister’s failure to confirm whether the government would abide by legislation to prevent a no-deal Brexit.

Commenting on developments in Westminster, Mr Justice Bernard McCloskey said it appeared anything was possible in “Brexit land”.

The judge is presiding over a legal challenge in Belfast brought by victims’ rights campaigner Raymond McCord against a no-deal Brexit.

At a preliminary hearing in Belfast High Court on Wednesday, Mr Justice McCloskey indicated his intent to hear the full case on Friday.

But he stressed that the timetable, and the remit of the hearing, could be impacted by further developments in Westminster.

“The only thing that is clear is nothing is remotely clear,” he said. “Everything is absolutely unclear. This lack of clarity is likely to endure for some time.”

Earlier, outlining some of the unexpected twists, he highlighted uncertainty around whether the government would even abide by legislation to halt a no-deal Brexit if it passed parliament.

On Sunday, Michael Gove, the chancellor of the duchy of Lancaster, refused to confirm whether the UK government would act on a law to avert a disorderly exit on October 31st.

“One very senior government minister has already refused to give a commitment that the government would abide by statute law, remarkably enough,” said the judge.

Ronan Lavery QC, a lawyer for Mr McCord, said there was also the prospect that if legislation was passed to prevent a no-deal, the government could refuse to give it to Queen Elizabeth for royal assent.

The judge replied: “Who knows, the monarch might for the first time in living history refuse to provide royal assent. Anything is possible – this is Brexit land.”

Mr Justice McCloskey also highlighted that UK prime minister Boris Johnson had said “unequivocally” on Monday evening that he would not call an election, only to say otherwise the next night.

Mr McCord and two other applicants are challenging the government’s handling of the Brexit process. The cases are due to be heard as one.

The campaigner, whose son Raymond McCord jnr was murdered by loyalists in 1997, had initially sought a discrete interim relief hearing to challenge the prorogation of parliament.

The substantive case will not now focus significantly on the prorogation issue, and instead the Northern Ireland-specific aspects of the government’s overall Brexit policy.

Another review hearing has been scheduled for Thursday afternoon. – PA