Ructions in Government over mixed messaging on Covid-19 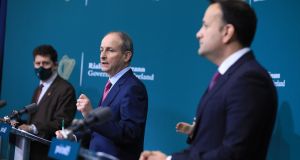 Ministers and senior sources across Government have acknowledged that recent confused messaging on the future management on the pandemic had been harshly received by the public.

One senior figure in Government said it was the “worst weekend” he had experienced since the Government took office.

He said that the Taoiseach’s revelation in an interview late last week that Level 5 restrictions would remain in place until the end of April had “shattered people”.

A senior official said it had been a terrible week for the Government, pointing to differences in the content and tone between the recent statements from the Taoiseach and Tánaiste.

Mr Martin’s warnings about another two months of lockdown came after suggestions by the Tánaiste, Leo Varadkar, that construction could open after March 5th, a message echoed by the Minister for Housing, Darragh O’Brien.

Sources also reported that parents were increasingly annoyed about the lack of clarity about when their children would return to school. While Ministers have said that some classes will return in early March, it is unclear when all children will be back, with some suggestions that all pupils will not be back at school until after the Easter holidays, six weeks away in mid-April.

Another senior source complained about recent confusion in the messages coming from various parts of the Government, saying that there were differences between the Taoiseach and Tánaiste, the HSE and the National Public Health Emergency Team (Nphet).

Commenting on Monday morning’s announcement by the Minister for Justice, Helen McEntee, of a plan to liberalise licensing laws, including allowing for longer pub opening hours, while pubs remain shut because of Covid restrictions, one Minister wondered, “Why in the name of God are we talking about opening pubs for longer hours?”

A TD said there was significant unhappiness in Fine Gael about the recent communications from Government, and that it would be discussed at the parliamentary party’s next meeting on Wednesday.

Many TDs in both Fine Gael and Fianna Fáil believe that the public is straining under current restrictions and needs to be offered some prospect of the restrictions being eased.

Meanwhile, construction industry chief Tom Parlon has written to Nphet asking for restrictions on the industry to be lifted.

In a letter to deputy chief medical officer Dr Ronan Glynn, Mr Parlon points out that there have been only 42 cases on sites since January of this year, with the industry working at 40 per cent capacity.

“I implore you to consider the evidence pertaining to the construction industry operating safely during the pandemic,” Mr Parlon wrote. “This evidence, from the HSE, shows that companies are effectively preventing Covid-19 entering and clustering on site. The industry is ensuring workers with symptoms don’t report to work. Where asymptomatic workers get on site, voluntary testing is identifying these cases. Where asymptomatic people are on site, clusters are not forming due to our robust safety procedures.”