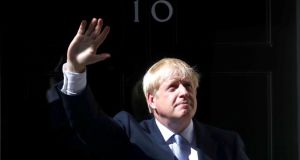 Boris Johnson: ‘I say to our friends in Ireland, and in Brussels and around the EU, I am convinced that we can do a deal without checks at the Irish Border, because we refuse under any circumstances to have such checks.’ Photograph: Hannah McKay/Reuters

Boris Johnson has begun his premiership with the most sweeping cabinet purge in recent British political history, appointing hardline Brexiteers to most of the top positions in government.

Seventeen ministers – more than half the cabinet – were sacked or resigned, almost all of them supporters of Jeremy Hunt, in a cull lasting little more than an hour.

Speaking on the steps of Downing Street, Mr Johnson warned the European Union that he was prepared to withhold Britain’s £39 billion divorce bill and repeated his demand that the Northern Ireland backstop should be deleted.

“I say to our friends in Ireland, and in Brussels and around the EU, I am convinced that we can do a deal without checks at the Irish Border, because we refuse under any circumstances to have such checks and yet without that anti-democratic backstop and it is of course vital at the same time that we prepare for the remote possibility that Brussels refuses any further to negotiate and we are forced to come out with no deal not because we want that outcome – of course not but because it is only common sense to prepare,” he said.

Mr Hunt left the cabinet after refusing to move from the foreign office, where he has been replaced by former Brexit secretary Dominic Raab, who also becomes first secretary of state, or de facto deputy prime minister. Sajid Javid becomes chancellor of the exchequer, the only senior figure in the new government who campaigned to remain in the EU in 2016.

Former international development secretary Priti Patel replaces Mr Javid as home secretary and Lis Truss replaces Liam Fox as international trade secretary. Michael Gove, who led the Vote Leave campaign with Mr Johnson but fell out with him during the contest to succeed David Cameron, replaces David Lidington as chancellor of the Duchy of Lancaster.

Dominic Cummings, a former adviser to Mr Gove who was campaign director of Vote Leave, will be one of Mr Johnson’s top advisers.

Among the ministers sacked on Wednesday were Northern Ireland Secretary Karen Bradley and her predecessor James Brokenshire.

Late on Wednesday night, arch Brexiteer Jacob Rees-Mogg was made leader of the Commons. Unusually, Downing Street said that he would not be a full member of the cabinet, although he will attend cabinet meetings.

Mr Johnson’s first hours in office were met with a noisy protest outside the gates of Downing Street, with demonstrators shouting “liar” as his motorcade entered the street.

In a speech that sounded at times like the launch of a general election campaign, Mr Johnson promised to recruit 20,000 more police officers, to improve the National Health Service and education, to produce a plan for social care and to deliver Brexit.

“The doubters, the doomsters, the gloomsters – they are going to get it wrong again. The people who bet against Britain are going to lose their shirts because we are going to restore trust in our democracy and we are going to fulfil the repeated promises of parliament to the people and come out of the EU on October 31st, no ifs or buts, and we will do a new deal, a better deal that will maximise the opportunities of Brexit while allowing us to develop a new and exciting partnership with the rest of Europe based on free trade and mutual support,” he said.

Taoiseach Leo Varadkar said he looked forward to meeting Mr Johnson to discuss Brexit but he made clear that Ireland’s and the EU’s commitment to the withdrawal agreement remained unchanged.

“I look forward to having the opportunity to sit down one to one and for our teams to meet and to see if they can put a little detail behind those slogans and statements,” he told RTÉ News.

“He’s a new prime minister and he’s only a few hours in office. Our job is to look out for the best interests of Ireland, the best for the EU, of which we are part, and to try and work with whoever is the British prime minister of the day.”