Less than two hours after PM walked into Downing Street, 17 ministers had quit or been sacked 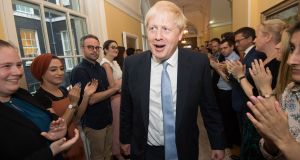 Shortly before 4pm on Wednesday, Boris Johnson marched up to the podium outside 10 Downing Street and promised to “change the record” after three years of self-doubt under Theresa May. He was all smiles as Downing Street staff applauded him on his way in but a few minutes later he was in his Commons office executing the biggest cabinet bloodbath in British political history.

Less than two hours after he walked into Downing Street, 17 ministers had resigned or been sacked, more than twice the number Harold Macmillan dispatched in 1962 in the Night of the Long Knives.

Among the casualties was Scottish secretary David Mundell who faced taunts in the Commons earlier about his public criticism of Johnson. When former Conservative Anna Soubry said she hoped he would remain in his post, Mundell said: “I fear that the honourable lady’s endorsement will have sealed my fate.”

The chamber was more crowded than in recent weeks for Theresa May’s final prime minister’s questions and her husband Philip watched from the gallery. Some of her most determined tormenters, including Jeremy Corbyn and Jacob Rees-Mogg, paid tribute to her sense of duty. But May ended her final exchange with the Labour leader with a barb.

“Perhaps then I could finish by saying this: as a party leader who has accepted when her time is up, might I suggest that perhaps the time is now for him to do the same?” she said.

After prime minister’s questions, Philip Hammond, David Lidington, Rory Stewart and David Gauke resigned to May rather than wait for Johnson to take office. She had one last lunch in the Downing Street garden with her husband before leaving for Buckingham Palace to resign as prime minister.

“Everyone who loves our great country, who works hard for their family and wants their children and grand-children to enjoy greater opportunity than they did. Thank you for putting your faith in me and giving me the chance to serve. This is a country of aspiration and opportunity and I hope that every young girl who has seen a woman prime minister now knows for sure that there are no limits to what they can achieve,” she said.

‘I don’t know why anyone would want the job’

After May’s 30-minute audience with Queen Elizabeth, Johnson was driven up the Mall to the palace. On the way, his motorcade was blocked briefly by climate emergency protesters and when he met the queen, she said: “I don’t know why anyone would want the job.”

Arriving in Downing Street, Johnson approached a lectern while supporters, including his partner Carrie Symonds, looked on, and paid the briefest of tributes to his predecessor before promising a radical departure from her legacy.

“The doubters, the doomsters, the gloomsters – they are going to get it wrong again. The people who bet against Britain are going to lose their shirts because we are going to restore trust in our democracy and we are going to fulfil the repeated promises of parliament to the people and come out of the EU on October 31st, no ifs or buts, and we will do a new deal, a better deal that will maximise the opportunities of Brexit while allowing us to develop a new and exciting partnership with the rest of Europe based on free trade and mutual support,” he said.

He promised to recruit 20,000 more police officers, to improve the National Health Service and education and to produce a plan for social care.

“I will take personal responsibility for the change I want to see. Never mind the backstop – the buck stops here,” he said.

He promised to create a new partnership with the EU, “as warm and as close and as affectionate as possible” and to guarantee the rights of more than three million EU citizens living in Britain.

“I say to our friends in Ireland, and in Brussels and around the EU, I am convinced that we can do a deal without checks at the Irish border, because we refuse under any circumstances to have such checks and yet without that anti-democratic backstop and it is of course vital at the same time that we prepare for the remote possibility that Brussels refuses any further to negotiate and we are forced to come out with no deal not because we want that outcome – of course not but because it is only common sense to prepare,” he said.

When he walked into 10 Downing Street for the first time as prime minister, Johnson was applauded by the same staff who had applauded May on her way out just over an hour earlier. There were some new faces, however, including Dominic Cummings, the campaign director of Vote Leave who was portrayed by Benedict Cumberbatch as a mad genius in the television drama Brexit: the Uncivil War.

Johnson left by the back door to drive to his Commons office to sack ministers or accept their resignation. Jeremy Hunt, his rival for the Conservative leadership, went to the backbenches rather than move from the foreign office. Most of Hunt’s most senior supporters were sacked.

Michael Gove, who led the Vote Leave campaign with Johnson but betrayed him during the 2016 leadership contest, replaces David Lidington as chancellor of the duchy of Lancaster in charge of the cabinet office and Stephen Barclay remains Brexit secretary.

Protesters shouted “liar” at Johnson as he arrived back in Downing Street after the purge of Hunt supporters in the cabinet and the shouts of protest continued into the night as the new prime minister put his team together.