John Redmond’s spirit of pragmatic persuasion is in short supply 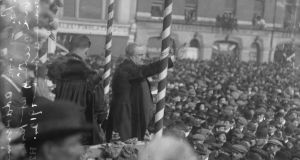 It was a small group that gathered in a committee room at Westminster on Wednesday evening to mark the centenary of John Redmond’s death, but a distinguished and politically diverse one. Northern Ireland secretary Karen Bradley was there, along with two of her predecessors, Theresa Villiers and Paul Murphy.

It felt right that Redmond should be remembered in the place where he spent almost four decades as an MP, from 1881 until 1918. He worked as a clerk at Westminster before his election, and his father and his uncle had both held seats here.

The event was a celebration of Redmond as a parliamentarian by today’s generation in Parliament who have grappled a century later with the relationships between Ireland and Britain and between two traditions in Ireland.

Some of the MPs were late, delayed by a debate on extending the Armed Forces Covenant, which protects the rights of British service personnel, to Northern Ireland. As a party leader who imposed strict discipline on his members to maximise their influence in the House, Redmond would have approved of the tardy MPs’ priorities.

“Such was John Redmond’s success that the Daily Mail, with its characteristic understatement when it comes to Irish matters, described him as ‘the Dictator from Dublin’. He had to exert discipline in his party, and recent academic analysis shows the Irish Party to have been the most active, disciplined and cohesive party in the House,” Bruton said.

Both Meleady and Bruton praised Redmond’s combination of political talent and a capacity for compromise which led Parliament to enact Home Rule for Ireland in September 1914. Two years later, he reached an agreement with the Unionist leader Edward Carson that allowed for a provisional partition of the island.

With the DUP and Sinn Féin deadlocked at Stormont and Britain and Ireland at loggerheads over Brexit, Redmond’s spirit of pragmatic persuasion is in short supply today. In a generous speech, Donaldson acknowledged that both sides in Northern Ireland could learn from the example of Redmond.

“I don’t think either side has covered themselves in glory when it comes to persuasion,” he said.

It’s hard to keep the poison of Brexit out of any conversation in Westminster these days, although Bruton introduced the subject in a light-hearted way, noting that one of the big controversies surrounding Home Rule was about whether the Home Rule government would have power to set and collect customs duties, as well as other taxes.

When Redmond died, he was so unpopular in Ireland that his family decided that his funeral cortege should not move through Dublin’s city centre. Bruton argued, however, that Redmond’s political life had not been a failure, listing legislative achievements that included land reform, the establishment of the National University of Ireland, the introduction of an old age pension and national insurance, and the first ever programme of public housing in Ireland.

“Redmond is a better model for a 21st-century world than are those who did not accept the necessity for compromise, and who failed to make an adequate effort to understand the aspirations of their traditional opponents,” he said.

“When passions are inflamed, absolute demands backed by violence are actually the easy way. No intellectual, or imaginative, effort is required. In these circumstances, compromise is harder, riskier, and more painful. Redmond chose the hard way. He took big political risks, while others sat on their principles – or hid behind them.”