London Letter: Elite’s sneering at majority’s vote is uninspired and stuck in 19th-century 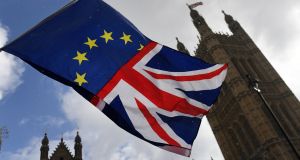 Pro-EU demonstrators wave a conjoined EU and UK flag at Westminster. Many Remainers tell those who backed Brexit how stupid and ignorant they are. Photograph: Andy Rain

The snow was falling fast, muffling the sound outside the tall sash window as it gathered and thickened on the empty street. Inside, as we sat around a great open fire, two Brexiteers, three Remainers and me, a storm was blowing up.

It had started gently enough, with a Remainer breaking ranks to join the Brexiteers in challenging me about the EU’s proposals for avoiding a hard border in Ireland. It was, they agreed, provocative and counter-productive and Theresa May was right to say that no British prime minister could sign up to it.

Besides, the Remainer said, if the Europeans want us to change our minds and stay in the EU, they should show a bit more understanding.

“Who said we want you back?” a German lawyer said, adding that a number of member states had recently joined France in wishing for a swift Brexit with no concessions to London.

Brexit is such a toxic topic of conversation in London that some dinner party hosts ban it while others insist that it should not be mentioned until the coffee. Nobody has ever changed their mind about Europe after arguing about it over a few glasses of wine but Brexit bust-ups are often revealing in other ways.

In my experience, Remainers tend to get angry and self-righteous while Brexiteers, despite their referendum victory, are often on the lookout for any slight or sign of disrespect. They don’t have to look far, because many Remainers will not hesitate to tell those who backed Brexit how stupid, ignorant and backward-looking they are.

While the German lawyer was rolling up the European welcome mat, describing how Britain would have to come back on its knees, give up its rebate and sign up to the euro and Schengen, a plump man on his right started to redden and tremble.

It’s a common complaint from Brexiteers, that Remainers and the establishment behind them think everyone who voted to leave the EU was thick. It is true that educational attainment was, with age, the strongest indicator for how people voted in the referendum, with the older and less educated more likely to back Brexit.

There are, of course, many intelligent and highly educated Leave voters and some of them have set up a website, briefingsforbrexit.com, as a platform for brainy Brexiteers. Led by economist Graham Gudgin and historian Robert Tombs, both at Cambridge, it was backed by 37 fine English minds in a letter to the Sunday Times last month.

Gudgin is a former economic adviser to David Trimble who is sceptical about the difficulties Brexit creates for the Border. He has accused the EU of using the Border as “a battering ram to elicit further concessions” from Britain.

Other supporters include Richard Dearlove, the former head of MI6, and assorted historians, philosophers and classicists. But it is Tombs whose presence most confounds Remainers, who struggle to dismiss a historian many of them admire so much.

A professor of French history, Tombs specialises in 19th-century France but he is best-known for The English and Their History, a brilliant sweep through 2,000 years of English history. Remainers were shocked when this brilliant writer, who knows more about Europe than most of his compatriots, campaigned for Leave under the banner “Historians for Britain”.

In a defence of Brexit last year, Tombs condemned what he called an unusually angry division that had emerged in British politics and society. He accused a large part of the political class, and a sizeable proportion of the country’s educated elite, of distancing themselves from the majority of the country.

“Never in modern times has there been such an overt and even contemptuous attempt to deny the legitimacy of a popular vote. Edmund Burke in the 1790s gave credit for our freedoms to ‘the wisdom of unlettered men’; William Ewart Gladstone believed that ordinary voters ensured the morality of government; the great French political theorist Alexis de Tocqueville realised that everyday experience enabled people to make sensible choices,” he wrote.

“But today, some prominent voices imply that only those with university degrees have opinions worth listening to. We might be back in the 1860s, when the Liberal MP Robert Lowe, who opposed giving working men the vote, sneered that ‘you should prevail upon our future masters to learn their letters’.”

A week after Tombs and his three dozen allies wrote to the Sunday Times announcing themselves, 1,400 Remain-supporting academics wrote to the paper.

“You report that ‘nearly 40’ academics have come together in support of Brexit. We would like you to know that there are very many more who are of the opposite view,” they said, eloquently making Tombs’s point for him.