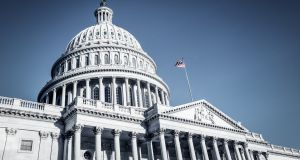 The Bill reaffirming support for the Belfast Agreement was passed by unanimous consent. Photograph: iStock

The US House of Representatives has unanimously passed a resolution reaffirming support for the Belfast Agreement, warning that a trade deal between Britain and the United States is contingent on the preservation of the peace agreement.

The resolution – which was brought to the House floor by New York Democrat Tom Suozzi and co-sponsored by Republican Peter King — urges Britain and the European Union to ensure that “any exit from the European Union by the United Kingdom supports continued peace on the island of Ireland and the principles, objectives, and commitments of the Good Friday Agreement”.

It also gives a stark warning to Britain on trade, warning that any future UK-US trade deal is contingent on the peace process being upheld.

Introducing the bill, New Jersey Democrat Albio Sires said the bill was “a clear signal to the United Kingdom and the European Union – it is a priority for Congress that any Brexit deal must protect the Good Friday Agreement in all of its components”.

Speaking on the House floor, Mr Suozzi said that the resolution “reaffirms the United States support for the Good Friday Agreement ... in order to ensure a lasting peace in Northern Ireland”. He highlighted the various challenges facing Northern Ireland, describing the collapse of the powersharing agreement in Northern Ireland in 2017 as “a roadblock to continued progress on several important issues”.

Noting next week’s general election in Britain, he said it would be inappropriate for the United States to interfere in another country’s election, but he added: “It is important that the United States makes our position clear on policies in which we have a vested interest.” He also cautioned that any trade deal between Britain and the United States “would be contingent on meeting the obligations of the Good Friday Agreement”.

Noting that he is a member of the ways and means committee, which has a key role in approving US trade policy, he said: “I promise to ensure that this clause in the resolution is strictly enforced.” His message was echoed by Michigan congressman Dan Kildee, whose sister and family live in Dublin. Noting that the United States is a guarantor of the Belfast Agreement, Mr Kildee, who is also a member of the ways and means committee, said: “No one in the UK government should expect that the United States would pursue or willingly sign any trade agreement ... that does not respect the principles that the Good Friday implemented” Pennsylvania congressman Brendan Boyle noted that the Belfast Agreement “was just the start of the creation of peace and reconciliation on the island of Ireland, not the end”.

Noting that the agreement was “one of our nation’s great foreign policy achievements of the twentieth century,” he said it “requires our continued engagement, particularly now as Brexit becomes a reality”.

“We will not stand by idly and watch the Good Friday Agreement weakened or destroyed,” he said.

The Bill was passed by unanimous consent. The co-chairs of the ad hoc committee to protect the Belfast Agreement, former congressmen Bruce Morrison and Jim Walsh, welcomed the outcome of Tuesday evening’s vote. “This resolution is a strong bipartisan follow-up to House Speaker Nancy Pelosi’s trip earlier this year to Ireland and Great Britain, including her visit to the Border, where she made it emphatically clear that the Good Friday Agreement must be protected as the Brexit negotiations continue,” they said in a statement. Noting the upcoming general election in Britain, they said that “the fact remains that a Withdrawal Agreement that protects the GFA has yet to be signed”.

“Given this political uncertainty, the ad hoc committee will continue to support any and all efforts to secure a Withdrawal Agreement that protects the core principles of the Good Friday Agreement.”

The gesture of support from the US House of Representatives comes ahead of a conference in Georgetown University in conjunction with the UCD Clinton Institute on Thursday which will explore the role of Ireland in EU-US affairs after Brexit. Minister for European Affairs Helen McEntee will be the key note speaker at the conference.