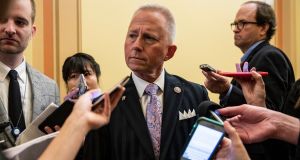 Five people who work for a Democrat who plans to switch and become a Republican have said they are resigning.

The five have written a letter saying they can no longer work for New Jersey member of congress Jeff Van Drew because his party switch “doesn’t align with the values we brought to this job”.

Mr Van Drew has said he plans to vote this week against impeaching US president Donald Trump.

That puts him at odds with nearly every other House Democrat.

Mr Van Drew, who is in his first term. represents a southern New Jersey district that Mr Trump carried in 2016 and was expected to face a difficult re-election next year.

The decision by Mr Van Drew reflects the heavy political consequences hanging over next week’s impeachment vote, particularly for moderate Democrats in districts that supported Trump in 2016.

While there is little doubt that Democrats will have the votes to approve the charges against the president in a near party-line vote, a small number of their conservative-leaning members are deeply uncomfortable with the idea of taking part in a Democrat-only impeachment vote and are spending the weekend torn over how to proceed.

A former state senator, Mr Van Drew represents a congressional district the president won by about five points in 2016. Mr Van Drew won the seat more easily thanks to a Republican opponent who made racist comments and lost his backing from the national party. – AP/New York Times