What will Brexit mean for Irish arts and culture?

The UK is leaving the EU, but it will remain our closest cultural partner into the future 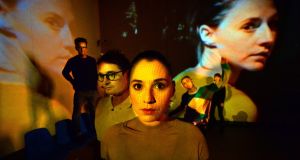 The cast and crew of the next Landmark/Galway International Arts Festival production, Arlington, opening on February 13th. The Abbey, like other Irish theatre companies, is concerned about the far-reaching effects of Brexit on its bottom line. Photograph: Cyril Byrne

Freezing rain whipped against the windows of the Hotel Kilmore in Cavan last Monday as Heather Humphreys welcomed an audience of politicians, local worthies, industry representatives and voluntary organisations to the latest instalment of the Government’s public “dialogues” on Brexit.

The bleak weather matched the subject as groups from different sectors sat around tables in breakout sessions to outline the potentially calamitous impact that tariffs, travel restrictions and other threats will have on them, and discuss how best to respond.

As Minister for Arts, Heritage, Regional, Rural and Gaeltacht Affairs, Humphreys has responsibility for a grab-bag of portfolios (memorably described by Miriam Lord in this newspaper as “AARGH!”). Many of her areas stand to lose out badly as a result of Brexit. All of them were represented in Cavan, with speaker after speaker talking about the grim implications for peripheral regions, Border communities and small businesses dependent on the agri-food industry.

Also present were representatives from the State’s main cultural institutions and agencies, including the Arts Council, the Irish Film Board and the Abbey Theatre. Many of their concerns were practical.

The application of different data protection standards is a worry for funding organisations that rely on sharing information on potential arts projects. The current tax waiver, which allows Irish citizens to have their UK earned income taxed here, is important for many artists and performers. And the application of different VAT rates and rules would make working in the UK and collaboration with UK producers and venues more difficult for artists.

For theatre companies, individual performers and other creative artists working on tight margins and shoestring budgets, any one of these could derail a potential project. Taken together, they create an atmosphere of uncertainty and high risk.

“The sense of uncertainty is palpable,” said the Arts Council’s director, Orlaith McBride. She warned that the sort of profile Irish companies have traditionally achieved through UK tours or appearances at the Edinburgh Festival could be under threat.

Understandably, the focus at Monday’s meeting was on measures to mitigate some of those risks. There was particular concern that Creative Europe, the EU-wide funding agency for culture, should not see a reduction in its budget when the UK ceases contributing, and that a hard Border would not block North-South co-operation on Irish language, heritage and arts.

Any impediment to the free movement of people, goods or services has negative implications for cultural industries, which often tend to transcend borders in their production processes and the audiences they reach.

But Brexit also exposes a deeper and often unspoken reality about how dependent Irish cultural production remains on our nearest neighbour – despite decades of EU integration.

As a small, peripheral Anglophone country, Ireland is heavily reliant on its privileged access to the much larger UK arts sector and its audiences. As the only other English-speaking European country, with generations of close connections with the UK, we benefit disproportionately from the fact that London is one of the world’s great cultural metropolises.

London ranks alongside New York as a global centre for publishing and theatre. It has the biggest film production studios in Europe. And the same is true in music, fashion, design, broadcasting and other creative industries.

When we hear about Ireland “punching above its weight” in the arts internationally, it is often because of amplification through the British cultural sphere. The unprecedented second Costa Book Award given to Sebastian Barry last week is just one recent example of how receptive the UK is to Irish artists and writers.

This country, in turn, is saturated by UK-produced cultural products. Many of our distribution networks for books, live performance, cinema and media are (whisper it) operated by UK-based companies – themselves often subsidiaries of larger multinationals – that regard this country as part of their domestic audience.

Confusion and uncertainty currently reign about what effect, if any, Brexit will have on such arrangements. “Will you become an export market now?” one Irish person was asked recently in London.

Michael McLoughlin, managing director of publisher Penguin Random House Ireland, points out that uncertainty and turbulence can be fertile ground for creative people.

The idea that Ireland might be treated as a UK region raises understandable hackles on this side of the Irish Sea. But the two countries now find themselves in an unprecedented moment: for the first time, it is English rather than Irish nationalism that threatens to loosen the bonds between them.

Add in the fact that British artists and arts organisations were overwhelmingly in favour of remaining within the EU, and the potential exists for political tensions around the subject of culture and funding in the UK over the next few years.

The fact is that, despite four decades within the EU, Ireland’s shared cultural space and set of cultural references with Britain remains far deeper than with any other European country, and those deep connections are not going to disappear or dissipate any time soon.

Tax issues won’t prevent Irish actors being cast in West End plays. From Brendan Behan to Enda Walsh, successful authors, actors, film-makers and musicians have gravitated towards London for generations, and will continue to do so.

But the next few years are going to be unpredictable and challenging for the arts in both countries.