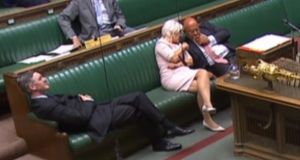 British parliamentarians have criticised Jacob Rees-Mogg for “lounging languidly” along the front bench during the historic Brexit debate on Tuesday.

The Leader of the House was seen reclining in the chamber, at times with his eyes closed, as MPs discussed plans to take control of the Commons agenda and pass legislation which would prevent a no-deal Brexit on October 31st.

Green Party MP Caroline Lucas told Mr Rees-Mogg his body language was “so contemptuous of this House and of the people”.

Addressing him in the Commons, Ms Lucas added: “For the benefit of Hansard, the Leader of the House has been spread across around three seats, lying out as if that was something very boring for him to listen to tonight.”

Mr Rees-Mogg appeared to furrow his brow in disagreement in response.

As he laid back, Mr Rees-Mogg could be seen pressing his head against a speaker, a tactic often used by MPs attempting to more clearly hear debates in the chamber.

Labour MP, Karl Turner, tweeted: “As a working class bloke brought up on a council estate in Hull I always feel enormous pride and gratitude when I go into the chamber of the House of Commons to represent east Hull.

“I’ve never felt a sense of entitlement. This is what that looks like!?”

SNP MP Gavin Newlands added: “Jacob Rees-Mogg is literally going for a (u)kip on the front bench. I just asked him if I should call his footman to get him a pillow. He politely declined.”

Lib Dem MP Sarah Wollaston questioned if Mr Rees-Mogg had “lost the ability to sit up” or if the move was “just bad manners”.

Angela Rayner, shadow secretary of state for education said: “I am half expecting his nanny to march into the chamber with a blanket, pillow and a hot cup of Horlicks for the poor man!”

She said: “Johnson, Rees-Mogg and their ilk literally think Parliament is their manor and they can do what they like with it.”

Labour Lord Stewart Wood joked that the pose resembled the cover for David Bowie’s album The Man Who Sold The World, while journalist Ash Percival referenced a famous scene featuring Kate Winslet in the film Titanic by tweeting the picture with the words: “Paint me like one of your French girls”. - PA